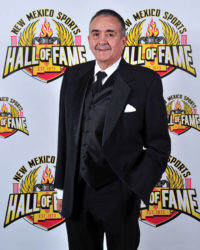 Gene was born in 1955 and raised a Belen “Eagle”.  Upon graduation he attended UNM earning B.S. and M.S. degrees.  Upon graduation from UNM in 1977 he began a 28 career with APS.  He taught at Barcelona, Kirtland, Del Norte, Madison, and La Cueva.  He coached football and or basketball at Belen, St. Pius, Del Norte, Academy, and La Cueva.  He went into administration with APS and was an Athletic Coordinator for the APS Athletic Department that was part of a team of community leaders to reinstate middle school athletics in 27 APS middle schools in 1995.  He served as an Assistant Principal at Cibola HS and retired in 2005 as the Executive Director of the APS Foundation, raising money for under-funded school programs and scholarships.  In his spare time he served as the NM AAU Boys Basketball Chair, coached our youth in AAU and AYBL, and was the District 1AAAAA Athletic Chairperson for the NMAA.  Upon retirement in 2005 he remained busy working as an Assistant Director at the NMAA and Executive Director of the Albuquerque Youth Basketball League.  He also serves on the NM Sports Hall of Fame Board of Director’s.  His wife Sadie retired from APS as a bilingual kindergarten teacher, has daughter Natalee 25, and son Tim 22 coaches at Eldorado HS.