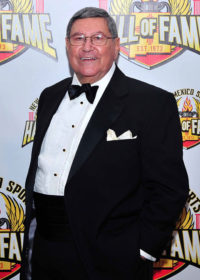 Justice Baca is the recipient of numerous awards, including the J. William Fulbright Award for Distinguished Public Service from George Washington University Law School and the Outstanding Judicial Service Award from the New Mexico Bar Association. Twice named by Hispanic Business Magazine as one of the “100 Most influential Hispanics in America”. He was also selected as one of seven lawyers on the Hispanic National Bar Association’s “Short List” sent to Presidents George H.W. Bush, William Clinton and George W. Bush with recommendation of appointment to the United States Supreme Court.

Justice Baca has been a member of the NM Sports Hall of Fame Board for over twenty years. A past president of the UNM Alumni Association, he is an avid Lobo fan.