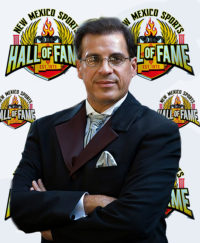 Mark, one of the most accomplished and decorated sportswriters and sportscasters in state history, just completed his first year on the committee.
The Albuquerque native graduated from Eldorado High (1975) and completed both broadcast and print sequences for his journalism degree from UNM in 1981. He has worked as a professional journalist in Albuquerque for 38 years, and is the only New Mexican to ever be named the National Sportswriter and Sportscaster Association’s state sportscaster of the year (1984) and sportswriter of the year (2015, 2016). In addition, Mark has captured more than 20 other awards at state, regional and national levels.
In 1996, he was the top individual honored by the Associated Press Managing Editors for national investigative story of the year. The award was for his reporting on the St. Pius Bucklegate controversy.
He also broke a number of national stories during the fallout from the fatal shooting of former UNM and Baylor basketball player Patrick Dennehy, who was killed by a teammate. The stories, in which Smith was interviewed numerous times by CNN, ESPN, MSNBC and the Today Show, led to the downfall of the Baylor program and coach Dave Bliss, a former Lobo coach. He has also been a correspondent for ESPN and CNN, and has been host of sports talk shows on three Albuquerque radio stations.
Mark wrestled and played baseball at Eldorado, and describes himself as “the ultimate gym rat” when it came to playing basketball at the EHS and Johnson Gym.
“I guess the adage is true.” Mark said with a laugh. “Those who can, do. Those who can’t, become sports writers.”
Mark, a New Mexico sports historian, stayed active in adult basketball, tennis, softball and golf leagues “until my fourth ACL made me realize the best place for me to be at a sporting event, is press row.”
He is the son of longtime APS teachers Rosemary and the late Manny Smith. Manny was a nine-time state handball champion.
Mark’s wife, Robyn, is an APS teacher and their 7-year-old son, Brock, is a first grader “and a future City Golf Champion,” Mark says. “Or, maybe, a caddy.”