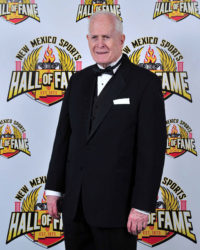 Russell Goff is the Executive Director for the New Mexico Association of Educational Retirees.  He has served as Executive Director since 2002.  Russell began his career as a teacher at AdobeAcresElementary School in 1964 and served for 37 years in the Albuquerque Public Schools until retiring in 2001.  In APS he served as a teacher, coach, activities director, assistant principal, lobbyist and culminating his career as Principal of Eldorado High School.  He also served as Principal of Washington and WilsonMiddle Schools in APS.  He received his Bachelor’s and Master’s Degrees from the University of New Mexico and did additional graduate study at the Adams State College in Alamosa, Colorado and Appalachian State College in Boone, North Carolina.  Currently, he serves on four boards including: the New Mexico Sports Hall of Fame, where he is a past-president, the New Mexico Coalition of Educational Leaders, the New Mexico Association of Educational Retirees and is a also a trustee on the New Mexico Educational Retirement Board.  Russell and his wife, Linda, have two daughters and two grandsons.