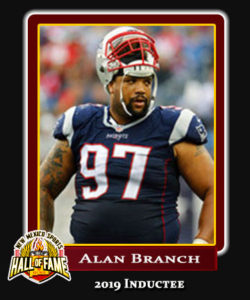 High School:
He was a phenomenal athlete. He was a 4-year letterman in football and basketball, which is rare in high school sports.
• Football
o Alan displayed tremendous versatility by playing defensive tackle, tight end, tailback running back, receiver, kicker, linebacker, Defensive Line, long snapper, and punt returner in high school.
o 2001 State Farm/Albuquerque Journal First Team Tight End and First Team Defensive Tackle
o 2001 – Only sophomore on the First Team All-State Offense and Defense
o 2002 6-5 4-1 District playoff team
o 2002 State Farm/Albuquerque Journal First Team Defensive Tackle
o 2002 1st Team All State as a Defensive Tackle,
o 2003 State Farm/Albuquerque Journal First Team Tight End and First Team Defensive Tackle
o 2003 First Team All-State as Defensive Tackle and Second Team All-State Tight End, despite only playing half the season at the position. Alan was moved to the fullback position for the second half of the season.
o The Cougars were defeated in the semi-final game against Carlsbad.
o His biggest honor was the Gatorade Player of the Year announcement in his senior season, which signified him being the best football player in New Mexico for the 2004-05 year.
o Highly regarded recruit coming out of high school, ranked as high as #6 nationally among defensive tackles
o Selected to the ESPN All-American Bowl in December of 2014 as a defensive tackle. During that All-Star game, he officially announced that he would be attending the University of Michigan, at that time, under the coaching helm of Lloyd Carr.
• Basketball
o Three-year starter on the varsity basketball team/
o Starting center when the Cougars advanced to the NMAA State Finals in March of 2005. Unfortunately, the Cougars were defeated by Eldorado in that championship game.
o Earning all-district honors as a sophomore and was second team all-state as a junior.
o Multiple Basketball Scholarships across the country for basketball including Arizona State and Wichita State.
• Named the Cibola High School’s Athlete of the Year in 2004-05.

College:
• He had 61 tackles, 15 tackles for loss, 6.5 sacks, one interception and four fumble recoveries in 37 career games at Michigan. Michigan’s record was 27-10 in the three years.
• 2004 Appeared in every regular season game and earned his starting position for the Rose Bowl Game against University of Texas. Alan would start the rest of his career for the Wolverines.
• 2005 Played against Nebraska in the Alamo Bowl during his Sophomore season.
• 2007 Junior year, Alan played in the Rose Bowl against University of Southern California.
• 2006 Earned ESPN All-America Honors and 1st Team All Big-10 Honors .
• Declared for the NFL Draft after his junior year.

Professional Football – Any other Professional Accomplishments?
Alan was the first pick in the second round in the 2007 NFL Draft , where he was selected by the Arizona Cardinals. Alan earned two Super Bowl rings during his 11-year career in the National Football League (NFL), and appeared in a total of 4 Super Bowls. He played for four NFL Teams. In his career, he had 279 total tackles, 10.5 quarterback sacks, 15 Pass deflections, 5 forced fumbles and 1 fumble recovery, which was in the Super Bowl LI win over the Atlanta Falcons.
• Arizona Cardinals (2007-2010)
• Alan played four years with the Arizona Cardinals, appearing in a Super Bowl against the Pittsburgh Steelers in the 2008 season.
• Seattle Seahawks (2010-2012)
• After the 2010 season, Branch signed a two-year contract with the Seattle Seahawks. He started 31 games in his two years with the Seahawks, where he recorded 63 tackles and 4 sacks from the tackle position.
• Buffalo Bills (2013)
• In 2012, he signed a one-year contract with the Buffalo Bills.
• New England Patriots (2014-2018)
• 2014 Alan signed a 1-year contract with the New England Patriots.
• 2015 Branch won his first Super Bowl, defeating his former team, the Seattle Seahawks, by a score of 28–24
• 2015 Re-signed with the Patriots on a two-year deal
• 2016 Helped the Patriots win 14 games and earn the top seed for the AFC playoffs
• 2017 February 5th Able to duplicate the Super Bowl feat when the Patriots beat the Atlanta Falcons 34-28 in overtime. The Patriots trailed 28–3 in the third quarter. They rallied all the way back to win the game, which featured the first overtime game in Super Bowl history and the largest comeback in the Super Bowl. Branch recorded three tackles, 0.5 sacks, and a crucial fumble recovery in the game.
• 2017 March 9, 2017, Branch signed a two-year extension with the Patriots. Branch played 12 games in the 2017 season and recorded 12 tackles. Branch was inactive for the playoffs, but the Patriots still made it to the Super Bowl without him only to fall to the Philadelphia Eaglesin Super Bowl LII.
• 2018 March 6th, Patriots declined the option on Branch’s contract, making him a free agent in 2018.
• Alan officially retired from the National Football League 2019; after his 11 seasons with the organization.