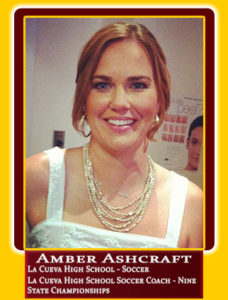 Community Involvement
• 2012 to Present Spearhead the La Cueva’s Women’s Soccer Team to raise money for Patrick Grange, who was a soccer player that died from ALS. In 2019 the soccer team raised $15000. They have raised $35000 during the eight years
• Foster parent for 5 years
• Grooming the next generations of High school players by coaching a U13 girls club team.
• Involved in her church