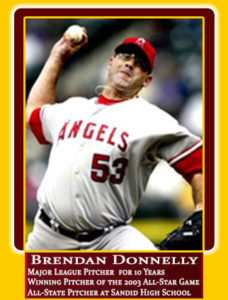 Professionally – Donnelly was drafted by the Chicago White Sox in the 27th round of the 1992 Major League Baseball Draft. He was a Major League Baseball relief pitcher. A right-hander, Donnelly pitched for twenty-one teams (two of them independents), twelve organizations, two independent leagues, eleven organized minor leagues, and both the American League and the National League.
He won the World Series in 2002 with the Anaheim Angels and was on the roster for the Boston Red Sox during their 2007 World Series victory. Donnelly was also the winning pitcher of the 2003 All-Star Game.
After ten seasons in minor league baseball and eight seasons in Major League Baseball, he retired in 2011. He finished his career with a 32-10 record with a 3.22 Earned Run Average and 360 Strikeouts.
• Minor Leagues
o 1993 – The White Sox released him in April 1993. In June 1993, he signed with the Chicago Cubsorganization; the Cubs released him before the start of the 1994
o 1994, he played for the independent Ohio Valley Redcoats.
o In March 1995, he signed with the Cincinnati Redsand participated in Spring Training as a replacement player during the 1994 Major League Baseball strike. As a result of his participation as a replacement player, Donnelly is permanently barred from joining the Major League Baseball Players Association. Donnelly remained in the Reds organization until he was released in April 1999.
o He started the 1999 season with the independent Nashua Pride. In May 1999, he was purchased by the Tampa Bay Devil Rays. He was released on August 12, 1999. On August 18, 1999, he was signed by the Pittsburgh Pirates. He was released on August 25, 1999. On August 26, 1999, he was signed by the Toronto Blue Jays. He was released in July 2000. In August 2000, he signed with the Chicago Cubs. He became a free agent after the 2000 season.
• Anaheim Angels
o In January 2001, he signed with the Anaheim Angels, where he made his major league debut in 2002at 30 years of age. He was an immediate fan favorite because of his intensity, the goggles that he wears, and his effectiveness as the main setup man to Troy Percival.
o Donnelly would go on to play an integral part of the Angels’ bullpen in their 2002 championship season, serving as the winning pitcher in Game 6 of the World Series. He was the third replacement playerto win the World Series, behind both Shane Spencer of the 1998 New York Yankees and Damian Miller of the Arizona Diamondbacks.
o In 2003, in that same role, Donnelly put up a 1.58 earned run averageand became a rare example of a non-closer who was selected as an All-Star. Donnelly went on to be the winning pitcher in that mid-summer classic.
o He suffered a broken nose during spring training2004, causing him to miss a large portion of the season. Donnelly remained fairly effective throughout 2004 in a very good bullpen for the American League West Champion Anaheim Angels.
o In 2005, Donnelly began to see a decline in performance, including a decrease in velocity on his fastballas a set-up man for closer Francisco Rodríguez after Percival’s departure. In June 2005, Donnelly was suspended ten days for having pine tar on his glove, an incident that caused a scrum and accusations that former teammate Jose Guillen tipped manager Frank Robinson[7] The suspension was the culmination of three weeks of extra scrutiny on Donnelly from opposing managers and umpires, including an accusation from then-Chicago White Sox manager Ozzie Guillén accusing Donnelly of touching his mouth too often.[6] He would later advocate for the legalization of pine tars for pitchers.
o In 2006, Donnelly continued to drop down the depth chart in the bullpen becoming an inconsistent middle reliever.
• Boston Red Sox
o On December 15, 2006, Donnelly was traded to the Boston Red Soxfor Phil Seibel.
o On July 31, 2007, it was announced that Donnelly would need Tommy John surgery. During his absence, the Red Sox would eventually go on to win the 2007 World Series. Donnelly became a free agent after the 2007 season.
• Cleveland Indians
o On February 6, 2008, the Cleveland Indianssigned Donnelly to a minor league contract with an invitation to spring training. The Indians hoped Donnelly would provide bullpen help at the end of the season when he recovered from Tommy John surgery. Donnelly was brought up to the Indians in August 2008, as a replacement for Tom Mastny.
o 2009 In February 2009, he was signed by the Texas Rangers. He was released in March 2009. In April 2009, he signed with the Houston Astros. He was released on July 1, 2009. On July 5, 2009, Donnelly signed with the Florida Marlins. He became a free agent after the 2009 season.
• Pittsburgh Pirates
o On January 16, 2010, Donnelly agreed with the Pittsburgh Pirateson a one-year deal worth $1.5 million. Before he could reach incentives that would have approximately doubled his salary, the Pirates released Donnelly in July 2010 denying that the incentives were the reason for the release. ] He was the last of the replacement players still in the major leagues, signifying no conciliatory admittance into the MLBPA more than 15 years after His likeness, name, and uniform number were still replaced by fictional players in video games.
• Strike One Pitching – training youth baseball players in the Phoenix, Arizona area