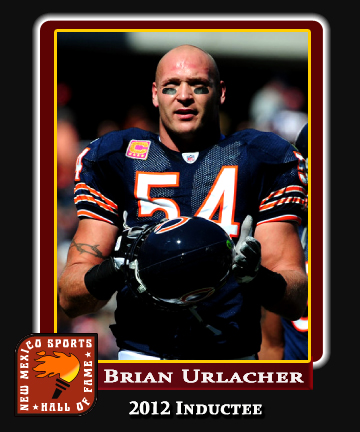 Just like the emergence of Don Perkins from the UNM football team to the Dallas Cowboys led many Duke City football fans to root for the Cowboys, the rise of another former Lobo, this time Brian Urlacher, to the starting lineup of the Chicago Bears turned countless Albuquerque fans into fans of Da Bears. Overlooked by almost every college football program in the country, except for the two Division I schools in New Mexico, Urlacher chose to become a Lobo – and one of the most-memorable and most-decorated, at that. But first, the man they call “Url” made his mark at Lovington High School, where he was an All-State selection at wide receiver and free safety and as a senior led the Wildcats to a perfect 14-0 record and the Class AAA championship in 1995. He had his LHS jersey number (11) retired during “Brian Urlacher Day” in Lovington in February of 2001. Wearing number 44 as a Lobo (1996-99), he played the “Lobo” on defense, hauled in passes (of his seven catches, six went for TDs) and two-point conversions on offense, and even spent time on special teams, returning kickoffs and punts. Urlacher was a two-year starter who finished third on UNM’s all-time charts with 442 tackles. As a junior, he was a First-Team Western Athletic Conference selection after starting every game at free safety and leading the nation with a school-record 178 tackles. As a senior, the MW Player of the Year earned first-team All-America selection by Walter Camp, the Football Writers Association of America and The Associated Press; he also was a second-team choice by The Sporting News and Football News and one of three finalists for the Jim Thorpe Award, given to top defensive back in college football. He entered the NFL as a first-round selection (ninth overall) by Chicago in the 2000 Draft and quickly made himself known to offensive players throughout the league. And he became quite popular with young football fans, too, who clamored to buy replica bears jerseys with his now-familiar 54 on them. Among his NFL accolades: eight career Pro Bowl selections while registering 1,691 career tackles, the most ever in Bears history; named the 2005 AP Defensive Player of the Year; he was the third Bear named NFL Defensive Rookie-of-the-Year (after Mark Carrier in 1990 and Wally Chambers in 1973), and just the second Bears player named to that honor( Mike Singletary was first, in 1985 and again in 1988; he leads all NFL linebackers with 14 interceptions; he became the first player in franchise history to have a 90-plus yard fumble return for a TD (90 yards at Atlanta on Oct. 7, 2001). And that Defensive Rookie of the Year award was easily bestowed upon Urlacher, after he shattered Bears’ rookie records for total tackles (165) and sacks (8). Brian Urlacher is more than a great football player, he is a great man!. He donated football and weightlifting equipment to Lovington High in 2002, supplied shoes for every boys and girls sports programs at LHS in 2006, hosts an annual charity basketball game at LHS benefitting his alma mater, made a donation toward the UNM indoor football practice facility and annually conducts youth football camps in the Duke City. He has never forgotten his Lovington roots, nor his days wearing the Cherry and Silver. He is the New Mexico Sports Hall of Fame inductee to be selected for the cover of a video game, which SEGA Sports did for its NFL 2K3 game in 2003, as well as appear in TV commercials for and promotions for nationally known products and services, namely Nike, McDonald’s, Old Spice and Vitamin Water. No doubt, some people have speculated, “How can you have a New Mexico Sports