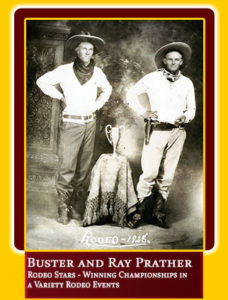 Professional – It would not be an overstatement to proclaim native New Mexican brothers Buster and Ray “Booge” Prather as having been “born in the saddle”. The Prather Family roots in New Mexico run long and deep. The boys’ father was Samuel Prather a territorial settler who emigrated from Texas and within four years had developed a horse breeding program that had gangrened the attention of buyers from around the country, including most notably the entertainer Buffalo Bill, who contracted with Samuel to provide horses for the European edition of his Wild West Show.
Unfortunately, the boys would not have a lot of time to learn from Samuel, as they lost him at an early age. Although very young, Buster and Ray quickly stepped up to help support their mother and other six siblings. Being natural athletes, they found that they could make quite a bit of money by competing in boxing matches around the state. Soon they were honing their rodeo skills they had acquired while living on the home ranch. In short notice “The Prather Boys” had developed a reputation as two of the best cowboys in the state. And these guys were no “one trick ponies”. Unlike many competitors that specialized in one division of rodeo, these boys had lots of mouths to feed back home, so it was essential to try for all the prizes. They made a mark in the sport by competing and winning championships in all the events, like: Wild Mare Racing, Bulldogging, Steer Riding, Calf Roping, Bronco Busting, Team Roping. Wild Cow Milking and Tournament Racing. Both boys began a record of consistently winning the highly coveted All Round Cowboy title in competitions around the southwest. They competed everywhere from El Paso, Pecos, Cloudcroft, Deming, Albuquerque, Silver City, Abilene, Carlsbad and Alamogordo. Even competing in some of the largest rodeos in the world including the Pendleton Round-Up and the biggest of all, the Calgary Stampede in Calgary, Canada. As they boys got older and began families, they expanded their hand in the rodeo business by various ventures. These two New Mexico rodeo icons were inseparable for their entire lives and truly expressed the comradeship and brotherly tenets of sports and sportsmanship.

• 1940 Together Buster and Ray combined four family ranches to make one of the top rodeo stock contracting operations in the state.
• 1947 Buster built and ran the first rodeo arena in Alamogordo appropriately called the Prather Arena
• During the summer months Buster and his wife Pearl owned and operated “The Barn’ livery stable in Cloudcroft where paid trail rides were offered to adults, but children were always allowed lessons and rides for free. Buster liked to say that “money should never come between kids and animals”.
• Buster started the stables in the 1920’s while Ray began his law enforcement career in 1947. While Buster ran the stable, Ray began a career as first a Deputy Sheriff for Otero County and then Sheriff. Here he dealt with vice raids, robberies, murder investigations, weapons recovery and assisted the FBI several times with federal investigations.

Community Involvement
• Instrumental in the development and fostering of the Ranch Hands Rodeo Organization.
• Active supporters and suppliers of the NMSU Aggies Rodeo Assn. in Las Cruces.
• Fostered the development of rodeo talent in the state the boys offered free rodeo training to any interested boy and girl at their ranch. it was here that every Sunday they would hold a “jackpot” amateur rodeo where the youngsters could hone their skills.
• In his free time Ray kept up as a rodeo timekeeper and pick-up man.
• Ray served as the Safety Coordinator for major events in the area including a 26,000-acre Lincoln Forest fire and the annual White Sands Play Day, where disadvantaged children were picked up and treated to a recreational day on the dunes with lunch, games and of course horseback rides!

Family:
• Buster and his wife Pearl had no surviving children. They were known for taking in those kids that needed some help while their families were going through hard times.
• Ray’s two daughters, both active rodeo participants in their youth are in their eighties and very active.