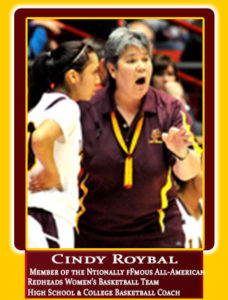 Cindy has been known as a pioneer and advocate for women’s sports not only in her home state of New Mexico, but all over the United States. Graduating one year before Title IX was established in 1972, she has worked hard to open opportunities for young women in high school and college sports. Not being satisfied with women’s opportunities in sports, she graduated from the College of Santa Fe in three years so she could get a head start on her coaching career and open opportunities for young girls that she never had. Over 40 years she has coach and been an administration in the high school and college ranks. Thirty-nine years in Education in New Mexico Coaching experience in softball, basketball, track and cross country, volleyball. The sport she coached the most was basketball which she has an overall high school basketball record of 377-105.

High School:
• Cindy was on the cutting edge of efforts to pass Title IX of the Education Amendments Act of 1972, giving women equal rights to participate in sports and other activities as early as her high school days. Her Efforts including a sit-down strike at Pecos High School to form a girls’ team or allow her to play on the boys’ teams. Cindy was very involved in school activities. However, what she really wanted was to play organized sports even on the boys’ teams.
• Salutatorian
• Editor of the school’s newspaper
• Editor of our Yearbook
• Played the bass drum for the band
College
• Member of the Women’s Recreation Association Basketball, Volleyball, and Tennis teams at College of Santa Fe. They played area colleges such as the University of New Mexico, New Mexico State, New Mexico Highlands University and several out of state colleges. There were no NCAA certified events for woman during those years
• Ranked number two in the tennis team.

Honors:
• 1983 Secretary of State Certificate of Appreciation (1983)
• 1985-1992-1994 Memorial House of Representatives
• 1985 Governor Recognition Award
• 1992 Cindy Roybal Day Pecos, New Mexico
• 1992 Key to the City of Pecos, New Mexico
• 1992 & 1994 Cindy Roybal Day Las Vegas, New Mexico
• 2007 Inducted in the New Mexico Highlands University Hall of Honor
• 2010 New Mexico High School Coaches Association’s Ralph Bowyer Award that she received with the help of the Peshlakai Family who lost their two daughters in a drunk driving accident.
• 2012 Inducted into the Naismith Basketball Hall of Fame as a member of the All-American Red Heads Women’s Basketball Team. On September 7, 2012, sixty-five surviving Red Heads appeared at a ceremony at the Naismith Basketball Hall of Fame to represent the team’s induction.
• 2012National Association for Girls and Women in Sport (NAGWS) Pathfinder Award provide national recognition to women who have demonstrated continuous dedication to sport leadership in their states.
• 2007 Inducted in the New Mexico Highlands University Hall of Honor
• 2013 Inducted in the New Mexico Native All-Stars Hall of Fame
• 2014 Awarded the prestigious New Mexico Sports Hall of Fame’s Award of Distinction for her years of contributions to New Mexico athletics
• 2016 National Coach of the Year Finalist

Community Involvement:
• 1970 -1984 Special Olympics
o Special Olympics Certificate of Appreciation
• Hosted numerous camps and clinics in different sports
• Helped raise money for local area people battling cancer or to help family and friend’s raise money for funeral expenses of a loved one.
Family
• Daughter of the late Pete and Paulina Roybal.
• Two brothers, Joe and Ron
• Five sisters, Isabel, Lena, Thelma, Trudy, and Maxine
• Cindy is very proud of her family. Her mother dedicated over 40 years to the teaching profession in Pecos’ school district. Her father was a self-employed contractor ,where I learned some skill to help me built my own Cabins in the Pecos. My brother, Joe was a successful teacher and coach. My other brother, Ron, worked in the State Correction system and has since retired. My oldest sister, Isabel retired from St. Vincent’s Hospital as the telephone operator. Sister Lena worked for the Secretary of State, then at St. Catherine’s High School. My sister Trudy retired working as an Airline Stewardess, Sister Thelma worked as a Social Worker, Sister Maxine worked several secretarial positions including State Police and Banks. All her siblings were successful and contributed tremendously to our Great State.