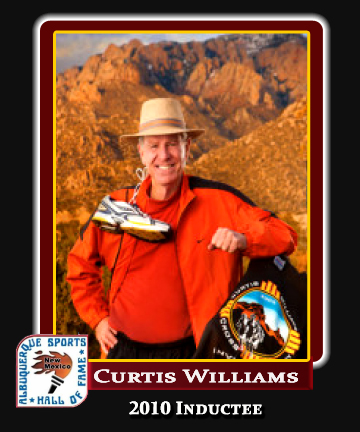 Curtis Williams began his career in education in 1972 with the Gallup/McKinley County Schools at Gallup Junior High School and Tohatchi High School from 1972-77. In 1979, Curtis assumed the position of head boys and girls cross country coach at Gallup High School and established one of the most dominant cross country programs in the region. His boys teams won 14 state championships and claimed 19 consecutive district championships. His girls teams won 11 state championships and 13 district titles. His overall record included winning an astonishing 92 percent of meets run. Curtis was named the New Mexico High School Coaches Association’s Cross Country Coach of the Year eight times and also earned Region 8 Coach of the Year honors five times. He earned his most prestigious honor in 1996 when he was named the National Cross Country Coach of the Year by the National Federation of Interscholastic Coaches.

Throughout his tenure Curtis has been an active member of the NMHSCA and the NMTCCA and has served as president in both organizations. Curtis was inducted into the NMHSCA Hall of Honor in 2003. Before retiring a few years ago Curtis was coaching cross country at Sandia High School. He will never be forgotten in Gallup where the annual Curtis Williams Invitational (cross country) is run each fall. On the day Curtis was formally nominated for induction longtime cross country and track and field coach Matt Henry, also a former UNM track and field coach, termed him “the Globetrotter of cross country in the State of New Mexico.”