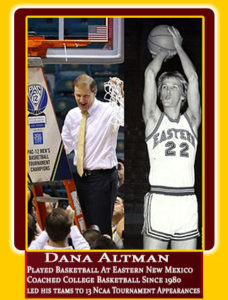 Professional: Altman broke into the coaching profession as an assistant coach for two years at Western
State (1980-82). Following four seasons as head coach at the junior college level, he served three years as an assistant at Kansas State (1986-89) under Lon Kruger, with the Wildcats advancing to the NCAA Tournament each year. Including a combined five seasons as head coach at Marshall University (1989-90) and Kansas State (1990-94), Altman has accumulated a 410-243 (.628) career record in 21 years at the NCAA Division I level. His 25-year overall head coaching ledger stands at 533-267 (.666), together with four seasons at Southeast (Neb.) and Moberly (Mo.) junior colleges.
• Junior College Head Coach
o Won 83 percent of his games (123-24) in four seasons as a head coach at the junior college level (Southeast JC, 1982-83; Moberly JC, 1983-86).
• Marshall University 15-13
• 1989 – In his first NCAA Division I head coaching position, Altman became the head men’s basketball coach at Marshall University in Huntington, West Virginia. Although he only spent one season as the coach of the Thundering Herd, Altman led the Herd to runners-up in the Southern Conference Tournament losing to East Tennessee State in the tournament championship game.
• Kansas State University 68-54
• 1990 Altman left Marshall after only one season to replace his mentor, Lon Kruger, at Kansas State.
• Although his four-year tenure as Kansas State’s head coach produced one NCAA Tournamentappearance, Altman will be remembered most for his ability to win close ball games, and for pulling off some of the biggest upsets in school history.
• Altman’s teams were 28–13 in games decided by six points or less, which included a 6–1 mark in one-point games. His 1992–93 club perpetuated a Kansas State tradition. Picked to finish last in the Big Eight, Altman’s Wildcats won 11 games in the final minute, earned the school’s first Top 25 ranking in five seasons, finished 19–11, reached the championship game of the Big Eight Tournament and returned Kansas State to the NCAA Tournamentfor the 21st time.
• 1993 Capped the season by upsetting No. 6 Kansas 74–67 in the semifinals of the conference tournament.
• 1994 made it two in a row over Kansaswhen he upset the No.1ranked Jayhawks 68–64 in Lawrence. His 1993–94 squad finished the season with a 20–14 record and advanced to the NIT Final Four in New York City.
• Creighton 327-176
• 1994 March 31st Became the 14th head coach in Creighton history following the 1993–94 season after four years as the head coach at Kansas State. Altman inherited a team that posted a 7–22 ledger the year before his arrival.
• Led the Bluejays to a slightly improved 7–19 record in 1994–95 before his 1995–96 squad jumped to 14–15. In 1996–97, Altman’s team was 15–15 and followed with another substantial jump to 18–10 and a bid to the NITin 1997–98.
• On April 2, 2007, Altman announced that he would become the head coach for the Arkansas Razorbacks, in a deal that was rumored to be $1.5 million per year, 5-year contract. Only one day later he had a change of heart and returned to Omahaand his team at Creighton, citing family reasons.
• On February 5, 2009, Altman won his 300th game as Creighton head coach. In his first 13 years at Creighton, Altman ranked third all-time on the coaching victories list in the 99-year history of the Missouri Valley Conference, trailing only Hall of Fame coaches Henry Iba (486)and Eddie Hickey (337).
• During his time at Creighton, his athletes earned three All-American honors on the court and three other Academic All-America laurels in the classroom. Three players he coached at Creighton, Kyle Korver, Rodney Buford, and Anthony Tolliver, have played in the NBA.
• Along the way, Creighton established school records for most victories in a two-year (52), three-year (76) and four-year span (99).
• From 1998-99 through 2008-09, Creighton was one of just six schools to win 20 or more games each of those seasons, an elite list that also included Duke, Florida, Gonzaga, Kansas and Syracuse.
• His teams claimed shares of three regular-season Missouri Valley Conference championships (including the 2008-09 crown) and six conference post-season tournament titles.
• His post-season tournament run and string of 20-win seasons, in addition to producing 10 or more league victories in each of the last 14 seasons, are all feats unmatched in the 103-year history of the Missouri Valley Conference.
• University of Oregon
• On April 24, 2010, Altman agreed to a 7-year contract worth nearly $2 million per year with Oregon. The university made it official on April 26 with a press conference.
• Under Dana Altman the University of Oregon has consistently been one of the top basketball schools in the Pac-12 with notable conference achievements including two regular season Pac-12 Conference championships (2016, 2017) and three Pac-12 tournament championships (2013, 2016, 2019). Altman has also led the Ducks to success in the NCAA tournament, including a Final Four run in 2017.
• In 2013 Oregon earned its first NCAA tournament bid under Dana Altman. This run ended in the sweet sixteen. Oregon continued this success, making the NCAA tournament in 2014 and 2015. Both the 2013–14 and 2014–15 seasons ended in the round of 32.
• On March 13, 2016, Oregon earned its first #1 seed in the NCAA Tournament in program history thanks to winning the Pac-12 regular season and conference tournament titles.
• On March 26, 2016, the Oregon Ducks lost, as a #1 seed in the Elite Eight to the #2 seeded Oklahoma Sooners due in large part to a lights out shooting performance by Buddy Hield.
• On November 11, 2016, Oregon and Altman agreed on a seven-year contract extension that will keep him in Eugene through the 2022–2023 season.
• On March 25, 2017, Altman led the #3 seeded Ducks to their first Final Four in 78 years with a 74-60 upset over #1 seed Kansas in Kansas City. This was Altman’s first Final Four appearance. Oregon would go on to lose in the Final Four to end what was considered a massively successful season for Altman and the Ducks
• On November 17, 2017, Altman won his 600th career Division I game in a 114–56 Ducks win over Alabama State.
• On March 14, 2019, Oregon and Altman agreed on a three-year contract extension that will keep him in Eugene through the 2025–2026 season.