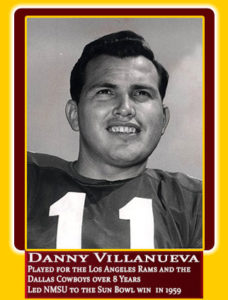 High School:
• 3-year letterman in football, basketball and baseball
• 1954 Football Destined to follow his brother Primo who was an All-American at UCLA led the national championship 1954 UCLA Bruins football team in total offense.
• 1955 Led his basketball team to the second round of the Southern California Interscholastic Federation southern section playoffs
• 1956 All-Desert Inyo League First Team center
• High school’s newspaper’s sportswriter
• Won a writing contest by the newspaper, Los Angeles Examiner, He would work for the newspaper as a copy boy and a correspondent for two years. This is where is love for sports writing began for Danny.
College
• Reedley Junior College (known as Kings River at that time)
o Quarterback at Ready from Reedley College
o All-Conference Quarterback
• New Mexico A & M … change the school’s name in 1960 to New Mexico St
o Coach Warren Woodson had recruited Danny’s brother, Primo when he was an assistant coach at the University of Arizona. Coach told Danny, an eighth grader “ I will come back for you in four years”. Danny went to Reedley Junior College, where the Dean of Students was close friend of Coach Woodson.
o Beat out 40 other players in Coach Warren Woodson’s kicking contest and in the final round beat out future College Hall of Famer Pervis Atkins to be the team’s placekicker. Danny had never taken placekicking seriously before this contest. He was recruited to be a quarterback.
o 1958 October 25th hit the winning field goal to beat Texas Western to help the Aggies win their first Border Conference game since 1953.
o 1958 November 8th The game against McMurray was tied 7-7 with seven seconds to go in the game and Danny kicked the winning field for his first field goal made ever.
o 1959 Kicked two winning field goals and 41 points scored for the season.
o Played of the teams that won back to back Sun Bowlgames in 1959 and 1960, which the team was undefeated
o Played back-up quarterback to 2008 NMSHOF, and Denver Broncos, Charlie Johnson,
o As a senior, he made 7 out of 8 field goal attempts, including a long one of 47 yards. He scored 41 points for the season, which ranked 2nd in the nation for kickers
o Named All-American Kicker
o Held the Border Conference’s record for the longest field goal kicked of 47 yards against Texas Western. LOGO
o Editor and Sportswriter for the school’s newspaper the Round Up.

Community Involvement:
A noted philanthropist, he contributed millions to New Mexico State and many other institutions. Providing food, clothing, and toys for needy children in the Hispanic community was one of his favorite causes.
• 1964-1973 Director of the Ford Motor Dealers of Southern California Youth Program in Los Angeles. He conducted kicking clinics, motivation talks to the youth
• 1965 – 1967 Served on the California State Recreation Commission and the Los Angeles District Attorney’s Advisory Council
• Served as commissioner of the California State Parks and Recreation Commission under governors Pat Brown and Ronald Reagan.
• 1971 – Launched the annual “Navidad en el Barrio” telethon to raise money for toys and food for needy Hispanic families in Southern California during the Christmas season, which was televised annually in December from 1971 to the early 1990s on KMEX-TV.
• 1983-1984 Served Villanueva served as the Commissioner of Boxing for the 1984 Los Angeles Olympic Organizing Committee
• 1990 – Launched the annual Fiesta BroadwayCinco de Mayo celebration which takes place in downtown Los Angeles.
• 1991 – He established the Danny Villanueva Scholarship Endowment to recognize NM State students who excel in leadership and community involvement
he returns to his alma mater during Homecoming each fall to help raise money for scholarships for Hispanic students who demonstrate leadership at NMSU. Each time, he writes a check to match the proceeds of an annual breakfast benefit.
• 2002, Villanueva presented a major gift of $250000 toward the university’s stadium annex project. It serves academic as well as athletic purposes, and Villanueva’s gift funded the Danny Villanueva Victory Club dining facility.
• 2005 Committed $2.5 million to the university’s “Doing What Counts” fundraising campaign, with $1 million of the gift designated for the NMSU Children’s Village.

Family:
• Married to Myrna Villanueva (Schmidt) for 58 years. They met while attending Reedley College while working at a peach packing house.
• two sons Daniel L. and Jim
• His brother, Primo Villanueva, was one of the first Hispanic surnamed players in the Canadian Football League(CFL)
• Five grandchildren (including Joseph Daniel Villanueva of Las Cruces); and nine great-grandchildren (four of whom are in Las Cruces.)