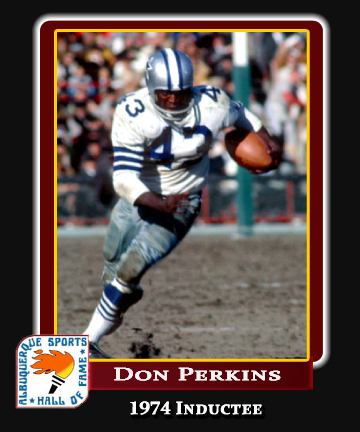 Donald Anthony Perkins (born March 4, 1938 in Waterloo, Iowa). A 1960 University of New Mexico graduate and long- time Albuquerque resident, Don Perkins played nine years (1960-1969) for the Dallas Cowboys. A native of Waterloo, Iowa, Perkins earned eight letters for Waterloo West High School, four each in football and track (sprinter). He also played basketball. Perkins captained the track team by the time he was a junior. In 1955 his team went undefeated. He made the first all-state team as a halfback, while playing both offense and
defense. He was president of the student body during his senior year. He was inducted in the Sports Hall of Fame – Waterloo, Iowa.

Perkins was one of the Cowboy’s first true “stars”. Don was selected to six Pro Bowls and was All-Pro once. Cowboy fans chanted “Hey diddle, diddle, Perking up the middle” when he ran the ball on first down. He walked away from the game at age 30 after the 1968 season, ranked 5th rushing and rushing touchdown leaders behind Emmitt Smith and Tony Dorsett with 6217 rushing yards and #6 on the Cowboys All Purpose Yardage list is #8 with 8005 yards.

Don originally was drafted by in the 9th admitted to the league too late to participate in the 1960 NFL Draft, so they signed Perkins to a personal-services contract for a $1,500 bonus and a $10,000 salary. This meant he would play for the Cowboys if and when they received an NFL franchise. Although he was drafted in the 9th round of the 1960 NFL Draft by the Baltimore Colts, the league honored the contract, but made the Cowboys compensate the Colts with a 9th round draft pick in the 1962 NFL Draft. Perkins sat out the entire 1960 season with a broken foot (fifth metatarsal) he suffered in training camp, so he began playing with the Cowboys in 1961, earning NFL rookie of the year honors. He lacked long-distance speed, but made up for it with outstanding quickness and balance. Although he was considered a superb blocker, he finished in the NFL’s top 10 rushing in each of his eight seasons in the league. On September 24 1961, he became the first running back in Cowboys’ history to run for 100 yards in a game, when he rushed for 108 yards on 17 carries against the expansion Minnesota Vikings. Perkins’ best year was in 1962, when he rushed for 945 yards and seven touchdowns, becoming the first Cowboy to make the All-Pro team. He was coming off his two best all-around seasons when he decided to retire prior to the 1969 season. At the time only four other NFL running backs had rushed for more than his 6,217 yards. Even though he played the fullback position at 5-10 204-pounds, his ten career 100-yard games ranks fourth in club history, he led the Dallas Cowboys in rushing in six of his eight seasons – from 1961 to 1965, then again in on the NFL’s All-Time Rushing list. Perkins is #3 on the Cowboys all-time round (106 pick) by the Baltimore Colts. The Dallas Cowboys franchise was 1967 & 1968. He also led them in touchdowns in four of his eight seasons. He was selected to six Pro Bowls and to one All-Pro team, while gaining a reputation in the NFL for his courage and resolve on some of worst teams in Dallas Cowboys history. Probably the only thing he couldn’t do was complete Tom Landry’s annual “mile run” in camp. Tom Landry oncetold NFL Films: “Perkins was in the toughest times,” “The guy was a remarkable runner, a great pass blocker and one of the best players in our history.” Walt Garrison replaced him in the starting lineup, and once said, “Don Perkins was the best fullback the Dallas Cowboys ever had”. Perkins was inducted into the Ring of Honor at Texas Stadium alongside his quarterback Don Meredith in 1976. Only Bob Lilly was inducted ahead of them, in 1975. In 2006, he was inducted into the Texas Sports Hall of Fame.

Don has been a Talk Show Analyst for CBS Sports, a Football Analyst for CBS Sports, ABC Sports, and Independent Networks. He has been a Sportscaster for local radio and TV stations. He was the Director of the Work Incentive Program for the State of New Mexico Department of Human Services from 1972 to 1985. He served on both the Executive Board of US West and the Board of Trustees for University Hospital from 1990 to 1993. He is currently a member of the Northwest Mesa Branch of the NAACP. A father of four children and grandfather of ten, Don has been active in local theater, public speaking, broadcasting at the local and national level, and is presently retired from the City of Albuquerque.