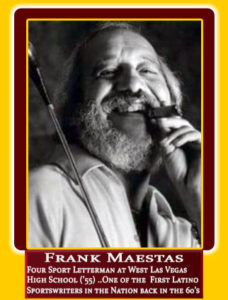 Professional:
Frank Maestas was a pioneer for Hispanics in Journalism in general and Sports Journalism as he was one of the first Latino sports writers in the nation back in the 1960’s. He was a sportswriter for the Albuquerque Journal for 28 years. Many of his feature articles brought tremendous pride and sense of accomplishment to numerous New Mexico families and communities. Through hard work and dedication Frank became one of the most respected sportswriters to ever cover events in the State of New Mexico and was always very proud to be a New Mexican. He managed to do all of this while befriending virtually everyone he dealt with and built a legacy for being a creative, adventurous character that will always dwell in the folklore of sports in New Mexico.
• 1960 Worked for a year as a sportswriter for the Albuquerque Journal
• 1961 Sports editor at the Santa Fe New Mexican.
• 1961-1962 History teacher at Pojoaque High School
• 1962 Returned to work at Albuquerque Journal where he worked until 1990.
• Covered virtually all sports in New Mexico including UNM Lobo football and basketball, and Albuquerque Dukes baseball
• Covered the Albuquerque Dodgers, Albuquerque Dukes and many Los Angeles Dodgers spring training camps.
• Known for his “Let’s Be Frank” opinion articles.
• Devoted the majority of his career to promoting New Mexico high school athletics. Frank wrote feature articles about high school teams, athletes, and coaches. Frank built relationships with coachers and encouraged them to calling in the scores after each game. Frank would then compile high school box scores from throughout the state for the morning’s paper. The first high school box scores, weekly statistics and top-ten rankings (which are now common-place) can all be attributed to Frank.
• 2014 Hosted Annual WAC skywriters tour
• National Host for the 1983 NCAA Final Four Sports Journalists
• Associated Press Top 20 voter for college football and basketball
• Heisman Trophy voter annually during 28-year career.