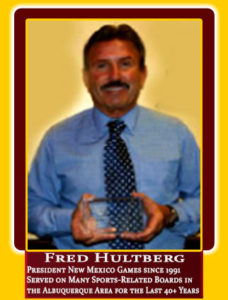 College:
• 1962 Baseball walk-on at Western New Mexico. He had to transfer to UNM because his father became ill.
• 1963 At UNM, he joined the Pike Fraternity. He immediately became involved and became the director of intramurals for the Pikes. During his time as the director, the Pikes won the intramural trophy all five years.
Athletic Involvement
• 1961-1980 Played fast pitch softball for the “Basket Shop”. The team was on the top teams in the top division in Albuquerque.
• 1987 to 2007 Played competitive tennis on a 4.0 rated tennis team. The team went to many regional tournaments. The made it to the Nationals and came in third one year.

Professionally – Fred is well-known for his tireless efforts and countless hours being the Executive Director of the New Mexico Games for over 28 years. The New Mexico Games has had up to 30 sporting events with over 6000 athletes each year. It is the largest multi-sporting event in the State. The Albuquerque Convention Center and Visitors Bureau estimated over 50 million dollars had been generated for the Albuquerque economy from hotel rooms, restaurants and entertainment from the New Mexico Games.
Fred is an avid sports fan and attends countless sporting events including most of UNM athletic events. He has attended five different World Series, one Super Bowl. U.S. Open Tennis Tournament. In 1972, Invited by the General Manager of the Albuquerque Dukes, AAA minor league baseball team to go to the only Minor League World Series in Hawaii. Some the big times on that trip would future Los Angeles Dodgers, Ron Cey, Davey Lopes. Larry Hisle, Tome Paciorek. Von Joshua and Steve Yeager.
He participated in two fantasy baseball camps including his favorite major league team, the Boston Red Sox. At the Red Sox camp, he played ten games in five days. He was the third pitcher of the team. He was 66 years old and the other two pitchers were 31 and 34.
Fred’s contributions to the promotion of the Albuquerque athletic in huge. He has been involved committees and boards dealing with sports. His contributions have made a huge impact on the athletes from all ages in New Mexico.
Fred was drafted into the United States’ Army. He served in Vietnam as a Military Police (MP) near the Korean Demilitarized Zone (DMZ). He served for three months beyond his one-year term. He was asked to be the personnel sergeant for the 504th MP’s.
• 1969 April returned to New Mexico and partnered with his brother to open the Basket Shop in Old Town. Later, G. P. Reyes, the Coronado Center manager called Fred to move his store to Coronado Center. He ran the Basket Shop until 1987.
• G.P. Reyes encouraged Fred to open another store, Timely Things in 1970. He operated the store until 1987. The store was the number one producing store based on square footage.
• 1987 Began working for the City of Albuquerque in the Parks & Recreation Division. He would oversee organizing over 40,000 adults and kid on the city fields and facilities – soccer, football, baseball, tennis and basketball. Fred worked his way up the division to become the manager of the Tennis and its league play. He was instrumental in overseeing the building of the Jerry Cline Tennis and Recreation Center.
• 2013 to Present Partnered with Marty Watts to the “Fred and Marty’ sports talk show on ESPN Radio 101.7 THE TEAM. The show focuses mostly on New Mexico sports and nationwide sports.
• 2019 Worked the National Senior Games by interviewing over 100 track and field athletes over five day. The Games were being streamed over the internet by Proview Networks of Albuquerque, New Mexico.

Honors:
• 1983 Received an award from the Albuquerque Convention and Visitors Bureau for his efforts during the NCAA Final Four
• 2006 Received a Certificate of Appreciation from the Community Tennis Association.
• 2013 Honored with Distinguish Service Award from the New Mexico Activities Association

Community Involvement:
• 1973 & 1974 President of the Coronado Centers’ Merchant Association
• 1974-1984 Sports Committee Chairman for the Albuquerque Convention Center and Visitors.
• 1974-1989 Joined the Dukes of Albuquerque volunteer team. If the team sold more than $100,000 preseason tickets, they be rewarded by traveling on the Los Angeles Dodgers’ corporate plane. They would travel to several major league baseball cities. During those trips, Fred would meet baseball greats like Hank Aaron, Steve Garvey, Orel Hershiser and Tommy Lasorda. They were rewarded all 16 years that Fred was on this team.
• 1978 – Present Board member of the Albuquerque Sports Hall of Fame, later changed the name to the New Mexico Sports Hall of Fame
o 1982-1983 Presidents
o Annual Awards Winners Committee Chairperson for more than 40 years.
o Left the Board twice for couple of years.
• 1980-1986 Coached his sons in the Mile High Little League, winning the major division championship twice.
• 1982-1983 Coached basketball at the Boys & Girls Club. During that time, he was fortunate to coach his sons plus NMSHOF inductee, Coach Don Flanagan’s son, Shane.
• 1982 Co-Chairman of the National Men’s Fast Pitch Tournament and a board member of the National Women’s Fast Pitch Tournament, which was held in Albuquerque.
• 1983 Oversaw the National High School Coaches’ Convention’s steak fry held at UNM South Golf Course and fed over 1000 coaches.
• 1983 Director of the Final Four National Association of Basketball Coaches (NABC) All-American game held at Johnson Gym on the UNM Campus. He worked closely with college coaching legends, John Wooden, John Thompson, Dean Smith and Jerry Tarkanian. The game was a sell out and televised nationally.
• 1985-1994 Board Member of the New Mexico Baseball and Softball Hall of Fame
• 1985-2005 Director of the New Mexico Nation Junior Tennis League, which is tailored to low income families.
• Member of the United States Tennis Association for 25 years
• 1991 to Present Became the Executive Director of the New Mexico Games, which in 2019 celebrated its 30th anniversary.
• 1996 Helped a group of local businessmen called “Legends of Baseball” led by Chairperson, David Hunt to raise money to save the UNM Baseball program. They brought in 20 ex-major league baseball players for the fundraiser. The support helped the program continue playing competitive at the NCAA level.
• 1996 Volunteered at the 1996 Summer Olympics in Atlanta, Georgia for 21 days with basketball held at the Georgia Dome. He was involved with the Sports Information Department and helped with the half-time shows of the basketball games. Fred had the opportunity to meet Hall of Fame players, like Shaquille O’Neal, Scottie Pippen, Charles Barkley, John Stockton, Reggie Miller, Karl Malone, David Robinson and many more basketball players and athletes. Fred paid all his expenses during his stay at Atlanta leaving him with an experience of a lifetime.
• 1996-2006 Member of the Community Tennis Association.
• 2009 to the Present Member of the Selection Committee for the Albuquerque Dukes/Albuquerque Isotopes Hall of Fame.
• 2017 Organized a steak fry at the Albuquerque Balloon Fiesta Park to recognize some of the all-time greatest high school football players in Albuquerque. There were over 15 legendary high school coaches and over 50 legendary high school football running backs like 1987 NMSHOF inductee and Albuquerque High School (AHS) star, Bobby Santiago; AHS star, Robert Lee Williams, Sandia High School and UNM great, Michael Carter; Manzano High School and UNM great, Rodney Ferguson; Highland High School, UNM and Houston Texans, Jared Baxter, AHS’s Ray Maxey and many more high school greats.