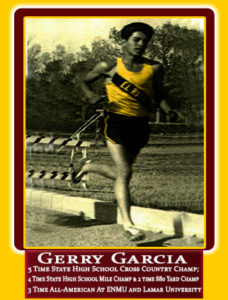 College
• After El Rito High, several colleges, including track powerhouse Kansas, showed an interest, but Garcia chose to attend Eastern New Mexico University.
• 1966 and 1967 At ENMU, he was also a National Association of Intercollegiate Athletics (NAIA) All-American in cross-country.
• 1967 As a sophomore, Gerry placed fourth in a field of 320 runners at the National Collegiate Athletic Association (NCAA) Division I meet held in Wheaton, Illinois. He was named All-American.
• That same year in a dual cross-country meet with the University of New Mexico, Gerry took first place. Garcia covered the course in a time of 18:27.8, but because of a sprained ankle, Gerry missed the 1967 NAIA national cross-country meet.
• 1967 Competed in indoor track. He won third place in the two miles at the NAIA Indoor track and field championships. In another two-mile race that year, he placed third behind George Scott and Kerry Pierce (Pierce went on to shock the track world that year by setting a new indoor two-mile world record.).
• 1967-68 Received the Greatest Greyhound award, which is given to the best athlete at ENMU each year.
• 1968 Transferred to Lamar University in Beaumont, Texas when his coach, Carl Babcock, left ENMU to coach at the east Texas school.
• 1968 Ran unattached and won the Southland Conference cross-country meet with a time of 19:11 over the four-mile course.
• 1968, Participated at the U.S. Olympic Trails but did not qualify for the finals.
• 1969 Lost, which was an upset at the Southland Conference cross-country meet by Bob Gray from Arkansas State, but at later that year, Gray placed 25th at the NCAA cross-country championship and Gerry placed 23rd. Both Gray and Garcia won All-American status. Gerry was considered one of the finest college distance runners in Texas in 1970, and while at Lamar, he consistently ran the mile under 4:10.
• 1970 Southland Cross Country Champion and 44th at the NCAA Championship Meet.

Post College Competition
• After graduating from Lamar in 1971, Gerry finished in a tie for ninth place at the National AAU cross-country championships at San Diego. He led at the end of the first mile, which he turned in 4:18, but suffered a slight muscle pull. He continued, despite the injury, and stayed with the leaders the rest of the way. During the closing ceremony, Gerry was recognized for setting a record for 1.6 kilometers in route to his 9th place finish
• 1972 Ran in the 1972 U.S. Olympic Trials but did not advance to the finals.
• 1973, Finished second to Jack Bachelor at the Texas Relays in the 10,000 meters. Frank Shorter finished third.
• 1975 joined the United States Army.
• 1976, Ran the two-mile at the Modesto Relays, in California, entering the race at the request of meet director Tom Moore. Moore wanted someone to pace Steve Prefontaine past Brendan Foster’s world record. However, Prefontaine hung back in the pack and said later that he was not running well enough for a world record assault.
• While in the U.S. Army, Garcia ran in the 1976 Bay to Breakers race in San Francisco. Twelve thousand ran in the race. Boxed in at the start, Gerry got off to a slow start and finished 11th.
• 1976 Represented the U.S. Army at the Pacific AAU Track and Field Championships at San Mateo College. Garcia’s 27:50 for six miles on the San Mateo track was a meet record and the fastest ever run by a PA-AAU athlete and broke Don Kardong’s mark by 1.2 seconds. Kardong went on to finish 4th in the 1976 Montreal Olympics.
• 1976 Ran in the U.S. Olympic Trials but did not advance to the finals.
• 1976 Ended his running career with the All-Army team at the United States Armed Forces Championship at Laney College in Oakland, California, setting a new meet record in the 10,000 meters.

Family
• Clarissa, age 21, a college senior, on the Presidential Scholarship, majoring in computer science in college.