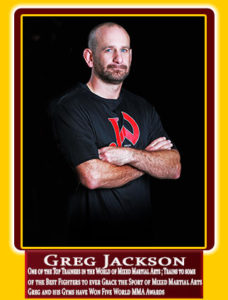 Professional – Greg is a mixed martial arts (MMA) trainer who co-owns Jackson-Wink MMA Academy in Albuquerque, New Mexico. Greg came from a family of wrestlers – his father, brother and uncle were all champions in the sport. Greg grew up in a rough neighborhood and began learning martial arts to defend himself. As a result, Greg was suspended from school for instigating fights on more than one occasion.
The Academy is the home to some of the best MMA fighters to ever grace the sport of Mixed Martial Arts. Greg is widely considered one of the top MMA trainers in the world. It is here that Greg and Coach Mike Winkeljohn have created something truly unique and took the sport of MMA to a totally different level. Coach Jackson has built the gym where fighters from every part of the world come to train in Albuquerque, New Mexico with on-sight housing and many other fighter related services. Because of these two coaches Albuquerque, New Mexico is considered the MECCA of Mixed Martial Arts. This team of coaches have brought numerous World Championships back to Albuquerque.

Honors
• Voted as a #1 MMA Camp in the world
• MMA Coach of the Year award in 2009, 2010 and 2011.
• 2009 Greg Jackson Fighting Systems won the MMA Gym of the Year award.
• 2015 Jackson-Wink MMA Academy won the MMA Gym of the Year award.
Community Involvement
• Member of the Board for Non-Profit Organization DeliverFund that is staffed by former elite intelligence operators from the CIA, NSA, FBI, Delta Force and Navy Seals who bring their experience in counterterrorism to bear on the human trafficking industry.
• Trains nearly every Police Department and Military in New Mexico and around the country on developing combative skills. Coach Jackson works with New Mexico’s Attorney General to develop a special self-defense system for our police officers.

Family
• Parents, Kris and Jim Jackson, who were Quakers originally from the Midwest. The family moved to Albuquerque, when Greg was three years old.