“Wasn’t that awesome? I don’t know what it looked like, but it was fun as hell to ride. I kind of feel like, ok,.. now people can see I can ride a little bit. I can do more than just hang on …” 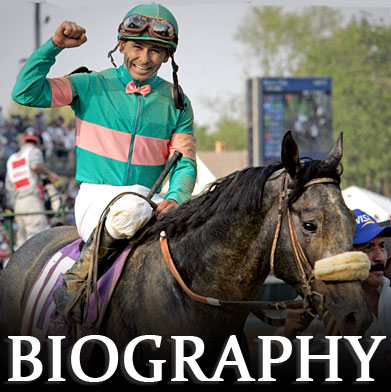 Michael Earl “Mike” Smith was born into a horse racing family on August 10, 1965 in Roswell, New Mexico. His father rode horses and his uncle trained them. As a son of a horse racing jockey, Mike dreamt of one day following in his father’s footsteps. Those footsteps led him to become one of the leading riders in U.S. thoroughbred racing since the early 1990s. He is the all-time leader in wins at the Breeders’ Cup with 22. As of July 21, 2016, he ranks 4th in Earnings with $276,117,486 in 32554 starts and 5342 victories and a 43% in finishing in the top 3 of his races.  He found himself at home on both East and West coasts finally settling down since 2000 in Pasadena, California.

Smith began riding at the bush track races in his native New Mexico at age 11. He took out a jockey’s license at age 16 in 1982. That year at Santa Fe Downs, he rode his first winner aboard Forever Man.  “When I first started … I was pretty young. It taught me a lot racing in New Mexico. And I didn’t stay in New Mexico very long once I started professionally, but it got me the experience I needed to get me started as a jockey.” He left New Mexico the following year, riding mostly in the Midwest where he earned his apprenticeship at Canterbury Downs Minnesota before moving to New York in 1989.

In 1991, Smith became of the few American jockeys to win a European classic by claiming victory in the Irish 2000 Guineas aboard Fourstars Allstar (some other American jockeys, notably Steve Cauthen, had won European classics before Smith, but were based in Europe).. Also that year he got his big break by becoming the leading jockey in New York from 1991–93, with 330, 297 and 313 wins, respectively. The following year, he rode his first Breeders’ Cup winner, Lure, in the Breeders’ Cup Mile.

1993, he truly arrived as a top jockey, setting a North American record for stakes wins in a year with 62. Among his highlights was a win in the Preakness Stakes aboard Prairie Bayou, which was his first Triple Crown race, plus his successful defense of the Breeders’ Cup Mile aboard Lure.

In 1994, he broke his own record for stakes wins with 68, 20 of them Grade I races. Several of those wins came while riding that year’s Eclipse Award for Horse of the Year winner, Holy Bull. He also rode two winners in that year’s Breeders’ Cup, and again won the Eclipse Award as leading jockey. Smith went on to ride two Breeders’ Cup winners in both 1995 and 1997. Smith also won the first ever ESPY Award as top jockey. He was also honored with the Mike Venezia Memorial Award by the New York Racing Association to honor given a jockey who “exemplifies extraordinary sportsmanship and citizenship”.

The dangers of Smith’s profession became evident in 1998, when he suffered major injuries in two separate spills. A broken shoulder in March took him out of action for two months. Then, in August, while leading the Saratoga meeting, he broke two vertebrae in his back, requiring him to wear a body cast for several months. He came back six months after the fall in the 1999 Gulfstream meet.

In 2000, he moved his home base from New York, where he had spent a bulk of his professional career to Southern California. That year he was voted the prestigious George Woolf Memorial Jockey Award by Santa Anita Park in Arcadia, California as the thoroughbred horse racing jockey in North American who demonstrates high standards of personal and professional conduct, on and off the racetrack, that honors a rider whose career and personal conduct exemplifies the very best example of participants in the sport of thoroughbred racing.

Smith was inducted into the National Museum of Racing and Hall of Fame in 2003.

In 2005, he rode 50–1 longshot Giacomo to victory in the Kentucky Derby. The win, Smith’s first in the Derby, was something of a vindication for him. He was aboard Giacomo’s sire Holy Bull, the 2–1 favorite in the 1994 Derby, but could finish only 12th after Holy Bull was bumped coming out of the starting gate. resulting in a $102.60 payoff on a $2 bet. They went on to finish third in the Preakness and seventh in the Belmont.

Smith is one of the jockeys featured in Animal Planet’s 2009 reality documentary, “Jockeys”.

Mike Smith will always be remembered as the jockey of Zenyatta, the 2010 Horse of the Year. Smith rode the superstar mare in 17 of her 20 races. Zenyatta and Smith were victorious in 16 of those 17 races, with their only loss being a second place finish in the 2010 Breeders’ Cup Classic, Zenyatta’s last race. Smith was named recipient of the Big Sport of Turfdom Award for 2010 from the Turf Publicists of America. The year before, Smith was a part of “Team Zenyatta,” accorded the honor for 2009. Included in the 2009 award were owners Jerry and Ann Moss and trainer John Shirreffs and his wife, Dottie. The annual honor is bestowed upon a person or group of people who enhance the coverage of Thoroughbred racing through cooperation with media and Thoroughbred racing publicists.

Smith was in the irons for the 2013 run for the roses and Belmont Stakes aboard Palace Malice, a colt in the string of runners training with Todd Pletcher. The pair took home the Black-Eyed Susans of the Belmont Stakes after skipping the Preakness. Smith ended his year by having major success at the Breeders’ Cup, winning two of the races. That year also included a win in the Kentucky Oaks on Princess of Sylmar, and the Santa Anita Handicap on Game On Dude. His overall Grade 1 total for 2013 was 15 races won.

In 2014, Smith was the regular rider on Shared Belief, who won four graded stakes races with Smith aboard. Smith won seven Grade 1 races on the year, including a victory in the Breeders’ Cup Filly and Mare Sprint on Judy the Beauty. In 2015, the jockey rode Songbird to a win in the Breeders’ Cup Juvenile Fillies to give him 22 lifetime wins, which is currently the most in the Breeders’ Cup history. Aboard Effinex he finished 2nd to American Pharoah in the historic Breeders’ Cup Classic.

In 2016, Mike continues to move up the all-time Earning rankings and is within distance of passing to legendary horse racing jockey greats, Pat Day and Jerry D. Bailey