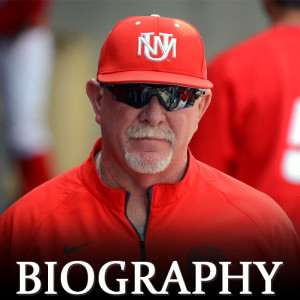 Head coach of the University of New Mexico baseball team for the last seven seasons, Coach Birmingham has, including his 18 seasons as the head coach at New Mexico Junior College in his native Hobbs, where he’d also coached the College of the Southwest diamond team in 1988-89, been a part of 20 championships; that impressive stat includes a national title won with the NMJC Thunderbirds in 2005 in Grand Junction, Colo. Prior to his days at NMJC, he was the head coach at Mayfield High, where he led the Trojans to the AAAA title in 1981. This won’t be his first Hall of Fame honor: In 2011, he was named to the National Junior College Athletic Association Hall of Fame. Ray has led the Lobos to four straight NCAA regional appearances and back-to-back Mountain West championships (2014, ’15). More than 150 of his former players have reached the pro ranks, including 2002 World Series champion Anaheim Angels reliever Brendan Donnelly and Seattle Mariners first-round pick D.J. Peterson