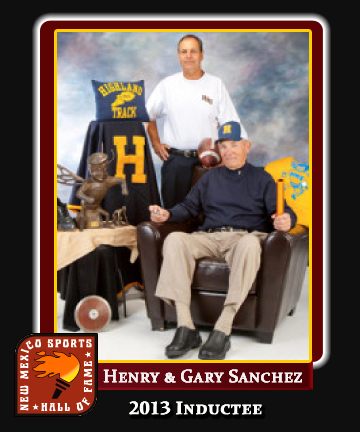 Henry Sanchez was born where Billy the Kid once hung out: Lincoln. Henry graduated from Capitan High in 1945, when he was voted the school’s outstanding athlete of the year; he’d been a member of the CHS state basketball championship team. After a stint in the U.S. Coast Guard, he attended New Mexico Highlands University, where he lettered in football, basketball and baseball. He was an all-conference end for the Cowboys in 1951. (Henry is in the NMHU Hall of Fame for his accomplishments on the gridiron) His coaching career began at Belen High School as an assistant football coach – a job that lasted one week because he had contracted polio. Recuperating early the next year, he was offered his first teaching job and taught physical education at Emerson Elementary in the Duke City. He spent two years at Emerson and then three at Wilson Middle School before landing where he gained his real notoriety and success: Highland High School. He was there for 26 years, retiring in 1983. He led the Hornets to three state championships in cross country and 10 in track & field, where he garnered 229 total wins – 156 duals, 48 invitational and 15 district titles, to go along with 25 state championships relay squads and 51 individual state champs. His cinderpathers won 10 state titles. He also found time to officiate football for 25 seasons and 30 years’ worth of basketball. He was the District 6 Coach of the Year in 1969, the District 8 Coach of the year in 1983, which was the same year he was honored as the National High School Coach of the year by the National High School Coaches Association. The Albuquerque Sports Hall of Fame didn’t miss those latter two accomplishments, honoring Henry with an achievement award in 1984.

Gary, graduated from Del Norte High School in 1974 and began his coaching career in 1975 as an assistant track and field coach for his father at HHS. He eventually began teaching and coaching at Highland in 1981, initially as the girls’ cross country coach and boys’ swim coach, along with working with his father. After his father retired in 1983, Gary Sanchez was chosen to replace his father as the third track and field coach in HHS history and stayed there 29 years. During his tenure, he won five state championships; he had six second-place finishes and had six third place finishes. Coach Sanchez had 61 individual state champions, 25 first place relay teams, and 121 gold medalist athletes. He was chosen as the NFHS National Track and Field Coach of the year in 2000 and the NMHSCA Track Coach of the Year in both 2000 and 2009, the NMTCCCA Boys’ Track Coach of the Year in 2000 and 2009, and was a regional finalist for the NHSACA National Track and Field Coach of the Year in both 2001 and 2006. He was inducted into the NMHSCA Hall of Honor in 2008 and awarded with the NMHSCA Ralph Bowyer Coaching for Character Award in 2009. Gary Sanchez actually began all this as a high school basketball official, refereeing at the highest levels of high school and college basketball. Later, he was the head football coach at Highland (2006-10; 29-24 in five seasons).