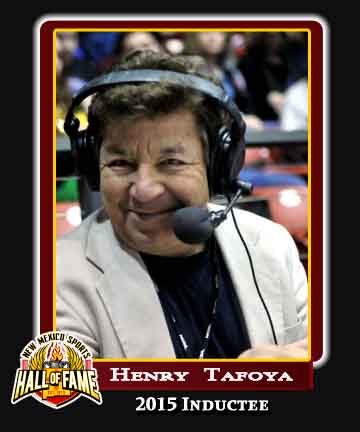 Born and raised in Albuquerque, “Henry T” was a three-sport athlete and Sandia High School, where he was a quarterback and defensive back for the Matadors, as well as an All-City baseball player and the Matadors’ point guard on the hardwood. Around the Land of Enchantment, though, Henry T is best known as a radio and television broadcaster and once the voice of the Lobos at KOB-TV from 1977-98. In 1990, he co-founded Albuquerque’s first all-sports radio station (KDEF-AM) and hosted a daily call-in show, as well as doing broadcasting of youth and high school games on the radio for over 37 years. He is a former winner of the New Mexico “Sportscaster of the Year” award and a two-time winner of the Play-by-Play award from the New Mexico’s Broadcasters Association. On Saturdays from 11 a.m. to 1 p.m., he hosts “Henry T Time” on ESPN Radio, continuing his legacy and “legend” status behind the mic.