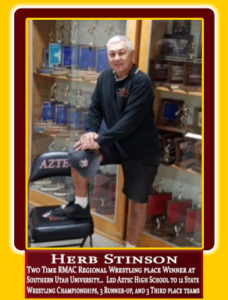 • Nine varsity letters – 4 year in football, 3 years in wrestling and 2 years in track
• During sophomore year, the wrestling coach, Jerry Parker to come out for the wrestling team. That decision would mold his lifelong calling. He just wanted to be a better football player
• During the 1967 high school season, Herb set his goal to becoming a coach and vowed . to return to take over the Aztec High School Wrestling program.
• Played as the starting right offensive guard on the 1968 team that lost to Lovington High School for the Class A Football State Championship 13-12. The tough offensive guard only weighed 145 pounds.
• He qualified for the State Tournament for his last 3 years and placed 3rd in the 1970 state tournament.
• 1969 Associated Press Class A All-State Football Second Team Offensive Guard
• Voted in 1970 as the top Aztec High School’s Outstanding Wrestler
• Ran the 800-yard race
• Member of the National Honor Society
• Senior Class President

• Dixie Junior College
o Dixie dropped their wrestling program for the 1970-1971 season.
o His freshman year, Herb was actively wrestle for the Las Vegas YMCA. In that program, he won a state championship.
o He represented Nevada at the AAU Nationals, where he placed 5th in Greco wrestling.
• Southern Utah University
o He was a two-time Rocky Mountain Athletic Conference regional place winner. 4th in the Rocky Mountain Conference tournament in 1973
o Qualified for the National Tournament twice

Community Involvement:
• Founded and was the Chairman of the Aztec Municipal Schools Hall of Fame.
• Board member of the New Mexico Wrestling Coaches Association Hall of Fame
• Founding Chairman of the Board for the Aztec Wrestling Program Building Committee. They have raised approximately $300,000 to build Aztec High School a new 100×50 top of the line wrestling facility of the future of the Aztec Wrestling Nation. The wrestling facility is expected to be open by the end of the summer 2019
• Contributed to the Aztec’ weekly newspaper the Talon News as a sportswriter from 2012-2019

Family:
• Terry, wife is a retired second grade teacher
• Tonya, daughter is a BYU graduate, who is the Executive Director of Farmington’s Visitor and Convention Bureau.
• Jerry, son is a Western New Mexico University graduate and Head of Oncology at Rolla Missouri Cancer Center
• Travis son is a Texas A&M graduate and Engineer with TechnipFMC Technical Authority, Workover Systems in Houston Texas
• All three of his kids were top student-athletes at Aztec High School, winning state titles and All-State awards.
• One of his fondest memories are his sons playing on the same football team in high school