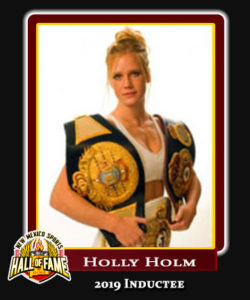 Holly is an American mixed martial artist who competes in the Ultimate Fighting Championship. She is the former UFC Women’s Bantamweight Champion, and a former professional boxer and kickboxer. She was a multiple-time world champion in boxing, defending her titles 18 times in three weight classes. She’s ranked by BoxRec as the tenth-best female professional boxer of all time. As of July 8, 2019, she is #3 in the official UFC bantamweight rankings.
Holm’s most notable win in mixed martial arts (MMA) occurred at UFC 193 (November 15, 2015), in front of a record-breaking crowd for a UFC event (56,215 people) in Melbourne, when she captured the bantamweight title and gave Ronda Rousey her first loss in the sport. This fight is generally considered to be one of the biggest upsets in combat sports history.

Amateur kickboxing career
· Holm’s path to a career in boxing and kickboxing began with aerobics classes when she was 16 years old. Her cardio-kickboxing instructor, Mike Winkeljohn, recognized Holm’s potential as a fighter and began training her.
· In September 2001, Holm won the championship title in the International Rules Adult Women’s Welterweight Division at the International Kickboxing Federation (IKF) USA National Amateur Championship Tournament, held in Kansas City, Missouri. She fought two bouts in the tournament. She won the first by technical knockout at 34 seconds in the first round. She won the second by unanimous decision. This was Holm’s last amateur competition.
· Her overall amateur kickboxing record is 6–0–2.

Mixed martial arts career
Early career
• Holm made her mixed martial arts debut on March 4, 2011, against Christina Domke at an event organized by her boxing promoter, Lenny Fresquez. She headlined the card with Jackson’s Submission Fightingteammate Keith Jardine. Holm won the fight via TKO in the second round after her opponent was unable to continue due to leg kicks inflicted by Holm.
• Holm returned to MMA on September 9, 2011, at Fresquez Productions: Clash in the Cage against Strikeforceveteran Jan Finney. She defeated Finney by TKO in the third round.
Bellator MMA
• On February 28, 2013, Holm made her Bellator MMAdebut against Katie Merrill at Bellator 91 in Rio Rancho, New Mexico. Holm won the bout via TKO in the second round.
• Holm announced that she would retire from boxing after her May 11, 2013, boxing match against Mary McGee so that she can fully concentrate on her MMA career. The message came as a punctuation in the negotiations to arrange a title-battle between Holm and the Norwegian champion Cecilia Brækhus. Holm went on to defeat McGee via unanimous decision, for her boxing retirement bout.
Legacy Fighting Championship
• On July 19, 2013, Holm faced Allanna Jones at Legacy Fighting Championship 21.She won the fight by head-kick knockout in the second round.
• Holm was expected to face Erica Paes at Legacy Fighting Championship 24 on October 11, 2013. However, Paes was removed from the card and Holm instead faced Nikki Knudsen. Holm won the fight via TKO due to a body kick and knees in round two.
• On December 6, 2013, Holm faced Angela Hayes at Fresquez Productions: Havoc. She won the fight via unanimous decision.
• On April 4, 2014, Holm faced Juliana Werner for the inaugural Legacy FC Women’s Bantamweight Championship. She won the bout and title via TKO in the fifth round due to a head kick and punches. Holm broke her left arm during the first round of the bout.
Ultimate Fighting Championship
• On July 10, 2014, the media announced that Holm had signed a multi-fight deal with the Ultimate Fighting Championship(UFC). Later in an interview with MMA Junkie, Holm’s manager Lenny Fresquez disclosed that Holm’s contract is for five fights.
• Holm was expected to make her debut at UFC 181against Raquel Pennington. However, on November 13, Holm was forced to pull out due to an undisclosed injury. The two fighters faced each other at UFC 184. Holm won the bout by split decision (29–28, 28–29, and 30–27).
• Holm faced Marion Reneauon July 15, 2015, at UFC Fight Night 71. Holm won the fight by unanimous decision (30–27, 30–26, and 29–28).
Women’s bantamweight championship
• In her highest profile MMA fight to date Holm vs. Rousey, Holm faced defending women’s bantamweight champion Ronda Rouseybefore a record-setting crowd in the main event of UFC 193 on November 14, 2015. Despite being a massive betting underdog, Holm controlled most of the bout with her superior striking and defended all of Rousey’s takedowns. The second fighter to take Rousey past the first round (after Miesha Tate), she won the fight via knockout in the second with a high kick, ending Rousey’s undefeated streak and three-year reign as champion causing her to spend the night in the hospital.
• Holm was also awarded her first “Fight of the Night” and “Performance of the Night” bonus awards (totaling $100,000). By winning the title, she became the first person to win championships in both boxing and MMA. Following the bout, UFC fighter Jon Jones said he thought Holm was “already the G.O.A.T. (greatest of all time) of women’s combat sports”. Her hometown, Albuquerque, New Mexico, proclaimed November “Holly Holm Month”.
• In her first title defense, Holm lost to Miesha Tatein the fifth round on March 5, 2016, at UFC 196. After four rounds of back-and-forth fighting, Tate defeated Holm in the fifth with a rear-naked choke. Holm was strong in the first round of the fight standing up but was less effective grappling with Tate on the mat. After Tate took Holm down in the second round, Holm almost submitted to a guillotine choke, but wriggled out just before the bell. In the fifth round, Tate scored another takedown and locked in another rear-naked choke. Holm refused to submit, was rendered unconscious, and the referee declared a technical submission.
• Holm faced Valentina Shevchenkoon July 23, 2016, at UFC on Fox 20. She lost the bout via unanimous decision.
Women’s featherweight championship
• Holm faced Germaine de Randamieat UFC 208 for the inaugural women’s featherweight championship on February 11, 2017. She lost the fight via controversial unanimous decision. At the end of the second and third rounds, de Randamie continued to throw punches after the horn had sounded and the referee stepped in, the first of which was a right hand that visibly wobbled Holm, who had already stopped fighting. The referee did not take a point on either occasion, which crucially affected the result of the fight. Fourteen of 23 media outlets and a majority of MMA fans still scored the fight in favor of Holm. Holm said post-fight she believed both instances to be intentional. She appealed to the New York State Athletic Commission (NYSAC) to review the referee’s decisions and determine an “appropriate result.” On February 28, the NYSAC denied the appeal, finding “no clear error or violation of statute or rule.”

Post championship
• Holm returned to bantamweight division after losing the featherweight title bout. Holm faced Bethe Correiaat UFC Fight Night: Holm vs. Correia on June 17, 2017 in Singapore. She won the fight via knockout in the third round via a head kick that dropped Correia and then a punch. The win earned Holm her second Performance of the Night bonus award. This also set up her bout against current UFC Women’s Featherweight Champion Cris Cyborg at UFC 219
• In a return to the women’s featherweight division, Holm challenged Cris Cyborgfor the UFC Featherweight Championship on December 30, 2017 in the main event at UFC 219. She lost the fight via unanimous decision. This fight earned Holm her second Fight of the Night
• Holm faced Megan Andersonon June 9, 2018 at UFC 225.She won the fight via unanimous decision.
• Holm was expected to face Aspen Laddin a bantamweight bout on March 2, 2019 at UFC 235. However, on January 31, 2019 it was reported the pair was no longer taking place at the event.
• On March 20, it was reported that Holm signed a new six-fight contract with the UFC.
• Holm faced Amanda Nunesfor the Women’s bantamweight championship on July 6, 2019 at UFC 239. She lost the fight via technical knockout in round one after being dropped by a head kick and finished with follow up punches by Nunes.

Family
• Holm has close relationships with her parents and brothers.
• Her father always attends her fights, and for years assisted in her corner during her boxing matches. She and her father are partners in a real estate company. Holm is a Christian and her faith background is in Churches of Christ.
• Her mother, Tammy Bredy, has seen little of Holm in the cage and rarely attends Holm’s bouts.