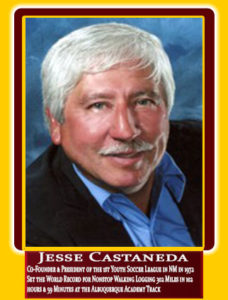 If you tell Jesús Jesse Castañeda that he can’t do something, you can almost be assured that that comment will motivate him to do it. When he was paralyzed at the age of eight from an auto accident, the doctors told him he would never walk again. But one doctor took the opposite view and might have been the one to set the notion of determination resonating inside of young Jesse. That doctor told him: “Follow my advice and believe. If you believe you can, you can.” Jesse took these words as a challenge, and after six months in a wheelchair, he was walking, and he has never stopped walking ever since. And Jesse Castañeda’s life grew from this doctor’s words, as his life-long motto has become like that of Cesar Chavez: “Si se puede!”

Even at age one, it was in his blood to be walker. On his father’s side he inherited the Tarahumara ability to run forever, and he used this inheritance to walk and run and explore the natural world around the small town of Nuevo Casas Grandes in Chihuahua, Mexico where he spent his first years.

He identified too with another Castañeda namesake, Pedro Castañeda, who travelled with Spanish Conquistadores in the Southwest in the mid-1500s. According to Jesse, he’s following in Pedro’s footsteps, who “again and again, was offered a horse, but always…refused. He said he’d rather walk.”
He was not an easy child, and only a year after his accident, he walked or rather ran away from school. His parents put him in a boarding school for troubled kids, but he soon lived out his father’s dream of being the first in the family to go to the United States and learn English. He took the bus to Nogales, Arizona to get his student visa and the woman who issued it to him had been a former homecoming queen from Menaul High School in Albuquerque. She convinced him that New Mexico was the place where he should go for his education.

Whether he’s putting one foot in front of the other on the La Luz Trail or spreading his message of optimism and encouragement for health and fitness through coaching, writing, or public lectures, you will always hear Jesse Castaneda proclaim his undying message: “If you believe you can, you can!…Sí se puede! It can be done!”

High School
• Enrolled in Menaul School in 1956, knowing only three words in English—yes, no and maybe. The principal didn’t like his given name Jesús and announced at his first student assembly that his name would be Jesse. The name has stuck to this day.
• 1958 Discovered football. His last two years there he was captain of the team and was an All-City and All-State player.

Honors
• 1974 One year later, Castaneda was invited by the British National Society for the Prevention of Cruelty to Children to come to England and receive the Topham Cup. This award was given to him for his fundraising for humanitarian causes, always a necessary part of every one of his record marathons walks. He was invited to a lunch at the House of Commons, and while there, he met Crawshaw, whose record he had beaten, and Princess Margaret, as well.
• 1977 February Awarded for his personal and civic achievements by being honored Albuquerque’s Athlete of the Year Award
• 1996 One of 10 New Mexicans chosen to be an Olympic Torchbearer, carrying the Olympic flame part way from Colorado City, Colorado on its way to the to the lighting of the flame in Atlanta for the 1996 Olympic Games.

Community Involvement
• 1979, then living in Taos, he founded the Taos Youth Soccer League and organized the first Marathon de Taos.
• 1970 – 2015 Using Youth Development, Inc. as his vehicle, he poured his energy, determination, and optimism into the “well-being and the positive development of children through athletic enrichment.” This he pursued through coaching, program development, family and community outreach, and countless public speaking engagements. Cambridge Who’s Who said of Jesse and his community service: Brings 55 years of experience to Youth Development, lnc…He is considered a shining beacon of hope and strength whose tireless dedication to New Mexico youth enrichment has been recognized by countless members of the community. Mr. Castañeda has been described by his peers as creative and innovative, filled with the spirit of adventure, discovery and positive motivation.
• At the beginning of the new millennium, Jesse transformed himself more into a recreational walker. He would still turn out for the occasional community fundraiser, but his energies went less toward adventure and more toward educating the Albuquerque community on health and fitness awareness.
• 2016-2018 Untiring and dedicated to youth health and fitness, one of Castaneda’s more recent projects was the championing of the Little Ninjas physical fitness/obstacle course at the Menaul school campus in Albuquerque, an effort for younger Head Start children to help promote their motor and physical development.