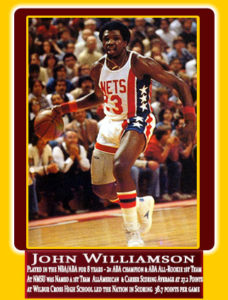 High School
• Played on the Connecticut state champion teams of 1966–67, 1967–68 and was runner up to crosstown rival Hillhouse in 1968–69, losing 76-71 in the final.
• 1968 Beat Central High School for the state title game in a 123-82 game. Williamson’s teammates, Alex Scott (scored 24 points), and Clint Davis (scored 40 points), led the way in the romp for Cross’s third consecutive title. Williamson chipped in 17, which was his average that year
• 1969–70 For his senior year, Williamson led the nation in scoring with a gaudy 38.7 points per game average. His team was upset in a semi-final match against Bridgeport Central, with an ending score of 105-103.
• In the final regular season game of 69-70 Cross played St. Anthony’s Catholic of Washington, D.C. They were the no. 1 team in the DC metro area and one of the top five in the country. Coached by Georgetown’s John Thompson, Cross was a huge underdog. All-America player Williamson scored 36 points and fellow All-Stater Danny Hardy had 22 to pace the Governors to a 74-66 win. In that game, John Thompson took his team off the floor and to the locker room with about two and a half minutes remaining in protest over officiating, and not return. During this season, Williamson had a string of nine straight games in which he scored 40 or more point.
• First from Connecticut named to Parade Magazine’s prestigious All-American Team.
College
• The most prolific scorer in Aggie history, averaging over 27 points per game during the 1971-72 and 1972-73 seasons
• Played only two season and left early to play professional basketball.

Professional
John was a 6’2” guard who was highly efficient jump shooter. After high school, Williamson left New Mexico State early for the pros. He played eight years from 1973 to 1982. He helped win two championships with the New Jersey Nets, before the team joined the more established NBA. Williamson’s patented one-leg, fall-away jump shots could ignite crowds and make an arena sound like feeding time at a soup kitchen.”Supe . . . Supe . . . Supe,” fans would chant.
• Before signing with the ABA Nets, he had been eligible for the NBA draft that year, being selected by the Atlanta Hawks in the 6th round with the 96th pick, but didn’t make the cut for their roster
• As a rookie, Williamson landed a roster spot with the Nets of the ABA as a free agent for the 1973–74 season. Williamson’s Nets arrival had coincided with Erving’s for the 1973-74 season. After starring at New Mexico State, Williamson averaged 14.5 points .Despite being a rookie, Williamson quickly entered the New York starting lineup along with superstar, Julius Erving and rising star rookie, Larry Kenon. After Williamson became a starter, the team’s fortunes quickly turned for the better and the team ended up winning their first ABA Championship that season.
• Williamson was named to the 1974 ABA All-Rookie team.
• Continuing with the Nets, Williamson, in Game 6 of the 1976 ABA Finals, scored 28 points with 16 of them coming in the fourth quarter; both him and Julius Erving offensively carried the team, combining for 59 points (31 of them from Erving) leading the Nets to come back from 22 points behind to win the game, the series and the ABA championship.
• In the 1976–77 season, Williamson was traded to the Indiana Pacers midseason; in the middle of the next season he was traded back to the Nets. With Erving traded to Philadelphia on the eve of the 1976-77 season and the franchise’s NBA debut, Williamson emerged as the Nets top scorer in his fourth pro season, averaging 20.8 points per game.
• In the 1979–80 season he was traded from the Nets to the Washington Bullets, which would be the last team he played for before the end of his NBA career until the 1980–81 season.
• By this time Williamson had completely declined as a player despite being only 29 years old and wouldn’t return to the NBA after that season due to contract disagreements in free agency and not maintaining a healthy weight to play.
• In 1982, he would play for the Continental Basketball League’s Las Vegas Silvers to get recruited back into the NBA but never received any offers.
• In his ABA/NBA career Williamson scored 9,017 points. He averaged between 11.5 and 29.5 points in every ABA/NBA season except for his last. He has 1274 rebounds and 1441 assists.
• Williamson still holds Nets team records in various categories, including most free throw attempts in a game, with 24 (since tied by Vince Carter and Devin Harris)
• In four full seasons and parts of three others with the Nets, Williamson averaged 17.8 points and is sixth on the franchise’s all-time scoring list with 7,202 points. He is one of only four Nets to have played on both ABA championship teams
• After professional basketball, Williamson would end up working in a juvenile detention center back in his hometown New Haven, Connecticut.

Honors
• 1974 Inducted into the New Mexico State Athletic Hall of Fame
• All-Century Team for NMSU Aggie Basketball
• NMSU Aggie basketball Ring of Honor in the Pan American Center
• Williamson’s jersey number (23) was retired by the New York/New Jersey Nets franchise on December 7, 1990; Williamson is one of four players who were with the Nets during their ABA days with a retired number; the other three include Wendell Ladner, Bill Melchionni and Julius Erving.
• 2018 Ranked #9 in the Nets All-Time Top 25 by Netbasketball.com