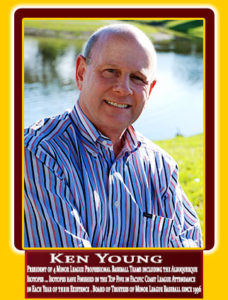 Professional – Since graduating from Penn State University, he has worked with a number of stadiums and arenas in food and beverage operations, event management, and team ownership. Young has even worked some of the world’s largest sporting events, such as the Olympics, the Super Bowl and the World Series. Ken has been the President of the Albuquerque Isotopes Baseball Club since its inception in 2002. With the focus on fan experience and customer service, the Isotopes have become part of the fabric of the Albuquerque community, becoming a major part of the quality of life in this community.
• 1985 to Present -President of Ovations Food Services Ovations provides food, beverage and merchandise services to recreation venues. The company specializes in personalized service and fresh product. Casinos are also served by the company
• 1986 to Present Director of Licensing for college football’s Outback Bowl in Tampa, FL.
• 1993 to Present – President of the Norfolk Tides, Triple A baseball team in the International League affiliated with the Baltimore Orioles.
o Ken presided over the construction of state-of-the-art Harbor Park in 1993
o Tides franchise has average over 500,000 fans over each of the organization’s 27 seasons under Ken’s ownership.
• 2002 to Present – President of the Albuquerque Isotopes, which is the Triple A baseball team in the Pacific Coast League affiliated with the Colorado Rookies
o Ken admitted that the name came from the series the “Simpsons” …. He said at the name unveiling, “We picked it because over the past year it has become a popular name, and it does have something to do with Albuquerque. In the three months after the team’s name was announced and before the team ever took the team sold more merchandise than the Albuquerque Dukes sold in any single season. They led the minor league in merchandising revenue in 2003.
o Ken’s guidance oversaw the renovation of Isotopes Park in 2003, bringing baseball back to Albuquerque after a two-year absence
o The Isotopes franchise has flourished both locally and nationally under Ken’s leadership, culminating with being the recipient of the 2018 John H. Johnson President’s Award as Minor League Baseball’s most complete franchise. Nearly 10 million fans have enjoyed Isotopes games in the organization’s first 17 seasons.
o Isotopes Park has played host to many big events which have put Albuquerque under a national and regional spotlight. Here are some of the big events:
 Major League Baseball exhibition games in 2004, 2005, 2010 and 2018)
 2007 Triple-A All-Star Game
 2009 Major League rehabilitation assignment of Manny Ramirez
 2011 Triple-A Baseball National Championship Game
• 2004 to the Present- President of the Norfolk Admirals – an American Hockey League team associated with the Tampa Bay Lightning
• 2004 to Present -Served on the Minor League Baseball Board of Trustees as their Triple-A at large representative
• 2006 to President – President of the Frederick Keys, Class-A Advanced baseball team in the Carolina League, an affiliate of the Baltimore Orioles
• 2006 to Present – President of Bowie Baysox, the Double-A baseball team, an affiliate of the Baltimore Orioles, and play in the Eastern League.
Honors
• 2004 – Distinguished Alumni Award, Penn State University
• 2009 Named Baseball America’s Minor League Executive of the Year
• 2012 Forbes Magazine ranked the Isotopes as the fourth most valuable franchise in Minor League Baseball
• 2013 The Sports Turf Managers Association named the Isotopes Park the “Field of the Year” in all professional baseball.
• 2018 Winner of the MiLB inaugural Copa De La Diversion (Fun Cup) event series featuring the Isotopes’ alternative identity, Mariachis de Nuevo Mexico
• 2018 Recipient of Minor League Baseball’s John H. Johnson President’s Award bestowed upon the organization which is deemed the industry’s most complete franchise.

Family
Three children and one granddaughter