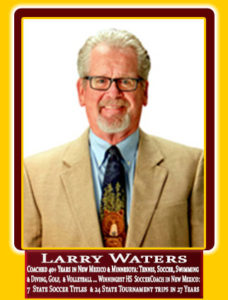 Born in Storm Lake, Iowa and moved to Fairfax, Minnesota. My father was a semi-professional baseball player and played for numerous teams in southern Minnesota. He passed away suddenly when I was 12. I am the eldest of 4 children and my mother raised us as a single parent. In 1971 -1973, Larry served our country in the US Army. He was a player/coach of the European handball team. Larry moved to Albuquerque in 1975 for a new job opportunity and my sister and her husband lived here.

Community Involvement
• Founding member and served on the Board of Directors for 10 years of the Southwest Soccer Complex in Bernalillo, New Mexico. (A 22 field nationally recognized complex). He was involved in the design, development and negotiations with Santa Ana Pueblo.
• 1978-1983 Aquatic Specialist and Supervisor for Albuquerque Parks and Recreation – oversaw pool inspections, training of WSI’s and lifeguards, learn to swim programs and the City’s Ditches are Deadly Program for eight years.
• 1978 – 2006 Huddle Coach for the Fellowship of Christian Athletes at Highland High School and La Cueva High School
• 1982 to Present American Coaches Effective Program teaching faculty for APS and NMAA
• 1983 to Present NSCAA Committee Chair and member of both the Coach of the Year and Fall Boys Ranking Committee. Ranking committee member for 30 years.
• 1990-1995 National committee member for the United Soccer Coach
• 1994 -2008 Coach and Director of La Cueva Fitness and Youth Soccer Camps and Team Camps
• 1996 to Present Serves on three committees for the United Soccer Coaches and am chair for the Fall Boys Soccer ranking committee
• 1998 2000 Soccer Camp Director for the Fellowship of Christian Athletes in Powell, Wyoming and St. Peter, Minnesota
• 1999 – Present Helped design and maintain website for New Mexico soccer: nmsoccer.com and lacuevabears.com
• 2004 – Present NIAAA National teaching faculty for classes 790 and 626 at the National Conventions
• 2005 – Present Serves as the District Chair for District 2 5A. Served in this position for 14 years
• 2006 – Present State AD Education Coordinator
• 2006 – Present Member of the NMADA
o 2008-2009 President of the NMADA
o 2009-2010 Past President
o 2007-2008 Treasurer
o Developed a statewide NMADA scholarship program
• 2006 – Present Serve as a member of the State Sports Specific Committee for soccer and swimming plus various state tournament ranking committees.
• 2007 -2010 Member of the NFHS Soccer Rules Committee
• 2007 – 2008 Board member of the New Mexico High School Coaches Association
• 2012 to Present Serves on 2 committees for the NIAAA
• 20 Years a member of the United Way d Tocqueville society.
• Member of the Scholar All-American Committee and the Robby Robinson Award Committee
• Member of Society for the Study of the Legal Aspects of Sport and Physical Activity. Larry is a presenter at the National Convention in 2000 and 2010
• Serves as deacon and Sunday school teacher for year.

Family
• Married to my wife Renee for 42 1/2 years.
• 2 son – Zachariah and Micah. Both sons were college soccer players.
• 6 grandchildren.