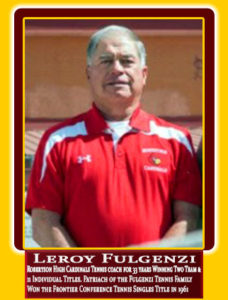 Professional– Leroy who coached for 34 years at Robertson High School winning eleven individual titles and one team championships. LeRoy grew up looking up to his older brothers, Gene, who was a singles and doubles state champion in 1948 and 1949 and Charlie, a former state quarterfinalist who is now deceased. However, with both his brothers far from Las Vegas, LeRoy would get pointers from sister, Dora, who despite being unable to play competitively at the high school level, did make a name for herself competing in community events. “I grew up with my sister – I give her the credit for making me a competitive tennis player.”. First family of New Mexico high school tennis could easily be the Fulgenzi family from northern New Mexico. For the last 3 generations they have graced the tennis courts at state tournaments.
It is important to place these accomplishments in the context of a less than ideal tennis environment: cold winters and springs in Las Vegas and the lack of first-class courts. Jokingly referring to “barrio tennis,” LeRoy Fulgenzi asserted that “this isn’t the country club,” but you could do just as well as any country club tennis player. The legacy of the Fulgenzi’s as a tennis family has a promising future. The secret is to start them young and plant the seed of hard work, discipline, and love of the lifetime sport.
• Las Vegas Robertson High School 1964-1998
o Spanish teacher for the entire 34 years
o 1972 Team state title
o 4 team State team runners-ups – 1995,1996, 1997, 1998
o 1987-1998 District Team Championships
o 1966-1998 State Tournament appearances
o Coached 11 Individual State Championships
o Coached 11 Individual State Runner-ups