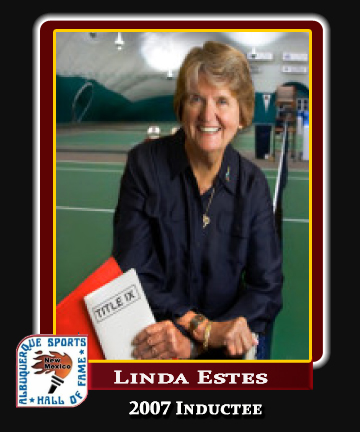 Every farm girl in New Mexico puts on an athletic uniform — a daily occurrence from Deming to Clayton, Albuquerque to Las Cruces, Jal to Farmington — she is wearing a garment that Linda Estes helped stitch.

The longtime Associate Athletic Director at the University of New Mexico, Estes was a singular (and often, lonely) voice pushing for gender equity in an era when few wanted to hear her message.
But Estes’ activism has stood the test of time. It’s effects are so pervasive that in 2008, it’s almost impossible to remember a moment when young girls didn’t habe the same athletic opportunities that boys enjoy.
However, the Dark Ages weren’t so long ago. And Estes remembers the fight very well. Her vision and dogged determination determination (and, yes memory) are just a few of the reasons she is among the 2008 inductees to the Albuquerque/New Mexico Sports Hall of Fame.
“I was naive,” she says today, “because when I took over, Title IX passed and I though, ‘Wow women are going to have equity.’ What id didn’t recognize was that Title IX was like the 55 mph speed limit: It didn’t mean a thing unless it was enforced.”
From 1973- 200, Estes helped write the ticket for women’s athletic as UNM, creating a solid program that includes most major sports and has made a showcase of women’s basketball. Her advocacy for skiing, (not always an easy sell), helped result in a national championship for New Mexico in the sport, the only NCAA team title the Lobos have ever won.
Now retired and living in Hawaii, Estes says she is proudest of two things in her long career: Helping make it acceptable for women to be in athletics in high school and college, and giving young girls an opportunity to pursue athletic scholarships in college.
In fact, her advocacy on behalf of a young Rosewell golfer named Nancy Lopez in the early ’70s helped bring the issue of opportunity for young girls to the forefront in this state.
Estes, 68, was exposed to gender equity a few decades earlier than most. She played on a boys; youth-league baseball team in 1947 in tiny Calico, Rock Ark. Necessity more than advocacy, got her on the team: the ballclub didn’t have enough players. But she still remembers getting that opportunity.
Fortunately, for hundreds of thousands of New Mexico firls, she didn’t just remember good. She fought for something better.