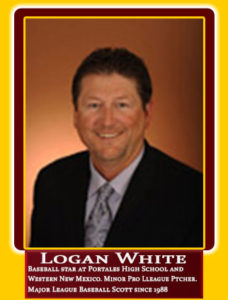 College
• 1981 Played baseball at Ranger Junior College and finished with a 2-2 pitching record.
• 1982 he attended Murray State Junior College with a 5-5 record, 1.56 ERA, 2 saves, 72 2/3 innings pitched, 42 strikeouts, 57 hits, and 26 walks. He was also named All-Conference Pitcher and All-Oklahoma JUCO Pitcher that year.
• 1983 at Western New Mexico State University, he finished with a 6-2 record and was again named All-Conference as well as All-District. Most of his wins were against Division I programs such as UNM and NMSU.
• 1984 Senior year at WNMU he had a 16-4 record with 2 saves.
o Named All-Conference, All-District, and Academic All American.
o Led the nation in wins and strikeouts that year.
o Still holds the record for wins and strikeouts in the Rocky Mountain Athletic Conference.
o Credited with turning the baseball program at WNMU around.
o First player ever drafted from WNMU. He was selected by the Seattle Mariners in the 23rd round of the 1984 First-Year Player Draft.
o Pitched a one hitter against New Mexico State University.