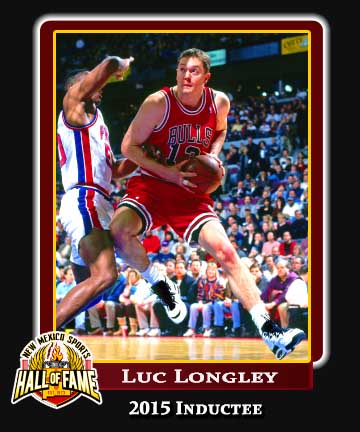 One of the most-popular Lobos while playing from 1987-91 for Dave Bliss, the big guy averaged 19.1 points, 9.2 rebounds and 3.6 assists in his senior season, which was highlighted by being a first-round draft pick of the Minnesota Timberwolves in 1991. Luc also played for the Chicago Bulls, where he was a part of thee straight NBA titles (1996-98). At the age of 19, he played for the Australian national team in the 1996 Olympics in Seoul, South Korea, and represented Australia again in Barcelona in 1992. IN 2006, Luc was inducted into Basketball Australia’s Hall of Fame in Melbourne. Obviously proud of his Aussie heritage, he was the first Australian to play in the NBA, the first to win an NBA title and has played more NBA games than any Australian who followed him. All told, Luc played in 567 NBA games, scored 4,090 points, grabbed 2,794 rebounds and blocked 549 shots.