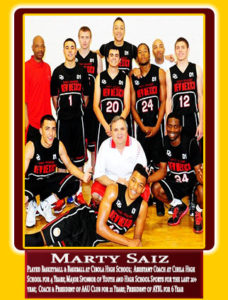 High School
• 3-year letterman in basketball and baseball
• 1974 – first freshman class at Cibola High School … his freshman football, Junior Varsity basketball coach and freshman baseball coach was the legendary basketball coach and NMSHOF Inductee (2016), Frank Castillo. His freshman basketball coach was long-time football and basketball official, Jake Vandergeest
• Introduced to coaching in 1976 & 1977. His head basketball coach, Louie Yannoni asked him to coach the Boy’s Club area 7th grade team. He led them to the summer championship. Some of the players were Phil Rohr, probably the greatest basketball player in Cibola High School basketball history, Joe O’Neill, current owner of ESPN 101.7 The TEAM radio station, Pete Martinez, former owner of the Albuquerque Tortilla Factory and Tom Davis, successful businessowner. This was the Class of 1981. He would coach them again as 8th graders and lost in the championship game.
• #2 in his class (Salutatorian) with a 4.0 GPA
• Vice President of the National Honor Society
• Member of the National Spanish Honor Society
• One of Cibola High School’s delegate to Boy’s State
• Voted by his senior class as “All-Around Senior” and male “Most Likely to Succeed”. The female “Most Likely to Succeed” was Judy Nakamura, current New Mexico Supreme Judge.

College
• Focused his energy on his academics and becoming the first one in his family to get a college degree.
• 1979-1983 worked for Eagle West Inc. in the summers as a door-to-door books salesperson. The salespeople were all college students from across the country, He had never sold anything and had never traveled outside of New Mexico. He would become the Top Rookie Salesperson in 1979 and number two overall. Over the next four years, he would be the company’s number one salesperson. He would work the farm towns of Modesto, California; Fresno, California; and Visalia, California, plus the cities of El Paso, Texas and San Antonio, Texas during those five years.
• After high school graduation would attend nearly all of Cibola High School basketball games. In 1980, Head Coach, Frank Castillo asked him to be an assistant coach for Bob Welch on the Freshmen basketball team. He was one of the first contract coaches of any sport at Cibola High School that was not a teacher. As an assistant coach, helped Coach Castillo lead the 1980-1981 team led by Phil Rohr and Joe O’Neill to their first district title and first state tournament appearance in school history. The team would finish third in the 4A State Tournament
• 1981-1982, he coached his own team, the Sophomore Team for the first time. The team was competitive but lost their first 11 games. With the encouragement of Coach Frank Castillo and the steady team improvement, the team would win 11 of the final 12 games.
• 1982, the JV Coach that year was going to be Wally Sanchez. He was offered the head basketball coach at one of the area high school a month before the basketball season was to start. Coach Castillo promoted Marty to the Junior Varsity Coach. The varsity team would make another state tournament appearance losing to Hobbs High School in the first round. He would coach one more year, 1983-1984 as the JV Coach.
• Towards end of Marty’s senior in college, he asked Coach Castillo what he earned as teacher and head basketball coach. Marty wanted coaching basketball to be part of his future. After learning the answer, he decided to become an owner of a State Farm Insurance Agency in 1985.
• Last game that he coached in high school was as an assistant coach for Frank Castillo at the 1984 North-South All-Star game. The other assistant coach was Gene Pino, 2017-2019 NMSHOF Board President. One of the players on the North team was Joe Coleman, the longtime Valley High School head basketball coach.

Community Involvement
• Christmas in April /Rebuilding Together Albuquerque – 1997- 2004
o 1997 to 2004 Member of the Board of Directors
o 1997 to 2004 Vice President of the Board
o This nonprofit is involved in repairing homes for elderly, disabled, and low-income citizens of Albuquerque. He helped coordinated over 4,500 volunteers, working on some 200 homes and raised more than $300,000 in donations.
• Albuquerque Youth Basketball League
o 2001-2011 Board member
o 2005-2011 President … took the league with the Gene Pino as the Executive Director from 65 teams to 155 teams with 22 high schools and middle schools’ gyms
o 2006 to 2015 Owner of the AYBL website
• Albuquerque Public School Sports Foundation
o Board member 2006 – 2009
o Organize the major fundraising activity of middle school sports and high school “B’ & “C” team sports. APS Celebrity Golf Extravaganza event raised over $400000 during the four years.
• New Mexico Sports Hall of Fame
o 2010 to Present Member of the Board of Directors
o 2015 – 2017 President
o 2017 -Present Past President
o Major Sponsor since 2004 and major Partner Company since 2014
o 2004 -2012 Sponsored the Top 10 Female and Male Albuquerque Metro Senior Student/Athlete
o 2012-2014 Sponsored the Top 10 Female and Male Albuquerque New Mexico Senior Student/Athlete
o 2014 Developed the current website – did the Inductee and Candidate pages … countless hours
o 2014 Public Voting in
o 2016 Introduced the Induction Celebration Weekend concept to include a Charity Golf Tournament
o 2014 to Present Designed and did the layout of the Souvenir Program from seven pages to 40 to 60 pages program
o 2014 to Present Raised over $250000 in Partnership money
o 2014 to Present Did all the Inductee’s Portraits
• 2011 Business Symposium Organizer of bringing nationally known business consultants, authors and speakers, Dale Dauten, Nick Sarillo, David Cottrell and Dennis Deaton. He partnered with the Albuquerque Hispano Chamber of Commerce. He events raised money for Joy Junction and AAU Basketball.
• 2005 to Present Major Sponsor of Juvenile Diabetes
o Major Sponsor since its inception in 2005
o Major photographer of all the team photos and photos of the event.
• 2011 Helped organize and was one of the Master of Ceremonies for a benefit dinner to raise money for his good friend, Gene Pino who had been diagnosed with ALS- Lou Gehrig’s Disease.
• 2011 to Present – Sponsor and fund raiser of the annual Walk to Defeat ALS, especially Team Gene Pino
• Member of the Albuquerque Hispano Chamber of Commerce
• Member of the Albuquerque Chamber of Commerce
• Sponsorship of countless youth and high school sporting event and teams in the area including Valley High School sports – football, wrestling, basketball and tennis

Honors
• 2003 Honored at the Albuquerque Sports Hall of Fame Promotion of the Year for his involvement in Albuquerque Metro High School Recognition program of high school football and basketball. Marty made sure the State Farm Insurance and his boss, Dennis Hodges were included in the honor. Without their financial support and Dennis’ encouragement the Recognition Program would have never happened.
• 2004 Pride of the Zone Finalist from the 3 states – New Mexico, Arizona and Nevada. This recognition was for Marty’s community work.

Family
• Teresa, wife … married on April 9, 1983. Being sports-minded, the few decisions he made of his wedding date was to change the date from April 2nd to April 9th when he realized he had tickets to the Final Four at the famous PIT in Albuquerque. Teresa is the Vice-President of the Marty Saiz Insurance Agency, Inc. She had worked with Marty for 30+ years with managing and growing their agency.
• Kenny, son … Albuquerque Academy grad … played varsity football for three years; varsity basketball for two years and was on the varsity track and field team in his senior year. He played football at Trinity University in San Antonio, Texas. He is working currently for an engineering firm in Albuquerque.
• Kevin, son … Cibola High School grad … one of few players to play varsity basketball for four years. He would play college basketball at Eastern New Mexico. He is currently an agent for his dad at the Marty Saiz’s State Farm Agency
• Megan, daughter, Hope Christian School grad … played two years of varsity volleyball. Megan will be attending the University of New Mexico’ nursing program.