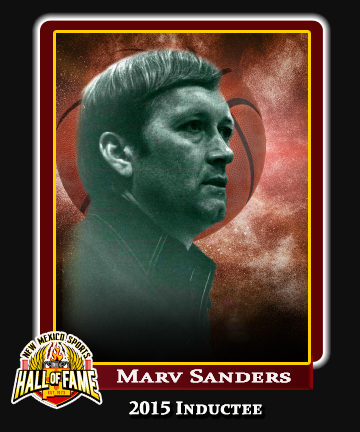 Coach Sanders, a 1960 graduate of Western New Mexico University, has bounced around more than a basketball when it comes to coaching in the Land of Enchantment. Only two coaches, Ralph Tasker and Pete Shock, have amassed more victories, but Sanders distinguishes himself out of that trio by having won titles at three stops, and at three classifications: Hatch Valley (1964), Silver High (1975) and Farmington High (1982, ‘86). Sanders retired in 2003, completing a 41-year career, practically averaging 20 wins per season. FHS honors him annually with its Marv Sanders Tournament every December. In 2010, Sanders was inducted into the WNMU Athletic Hall of Fame; as a Mustang, he’d twice been named an all-conference basketball player. He nearly passed up opportunities here to be a coach in his native Indiana: “After graduation, I went back to Indiana for two years, but after going three weeks without seeing the sun, I made the decision to make my way back to New Mexico.”