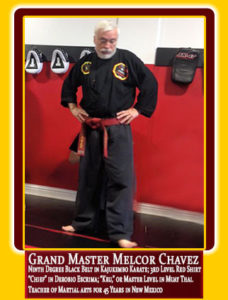 Professional
Grandmaster Melcor Chavez is a lifelong native New Mexican who has dedicated his life to serving youth and families in Albuquerque’s South Valley. He has successfully owned and operated Chavez Martial Arts Academy Inc. for over 46 years. He is well known for his reputation as an outstanding Martial Arts owner, instructor, trainer and cornerman.
Grandmaster Chavez is considered a pioneer of Martial Arts in New Mexico. His students have competed worldwide attaining International and National acclaim for their Karate, Boxing, and Kickboxing, Muay Thai, JuJitsu, and Derobio Escrima skills. Eighteen World Title Kickboxing, Boxing and Muay Thai belts have been attained by athletes under his direct training and supervision.
Grandmaster began studying Martial Arts as a young child, quickly becoming an accomplished competitor in forms and fighting. He competed in many National and local tournaments, winning championships in numerous prestigious Martial Arts tournaments such as the Central North American Karate Championships, and the Rocky Mountain Championships.
He has devoted his life to teaching martial arts. He is an instructor that expects a lot from his students and their parents. He believes that the hard work has paid off time and time again. His students are talented athletes who have persevered through the hard times in training and have become champions in competition and in LIFE! Many other students have also become National, State and Local champions as well. Every student he has taught has experienced success through their hard work and dedication. He has taught them to respect themselves and others. They have made him proud every day for these last 46 years!

• 1969 Junior World Jiu-Jitsu Champions.
• 1973, he earned his 1st degree black belt in Kajukembo Karate and on May 8 of the same year he began teaching the art of Kajukembo Karate as his chosen profession. Grandmaster began developing his own Kickboxing system during the mid-1970’s and traveled throughout the world including the countries of Japan, Canada, Australia, Belgium, Germany, Russia, Portugal, France, Mexico, and England where his students won Kickboxing, Boxing, and Muay Thai titles on a regular basis. On September 10, 2005 Grandmaster Chavez was promoted to the Ninth Degree with the title of Grandmaster in the Art of Kajukembo Karate.
• Grandmaster Chavez has successfully integrated his academic degree and his martial arts degrees to create a fully balanced science-based as well as reality-based teaching program. He currently holds the ranks of 9th degree black belt in Kajukembo Karate, Kru, or Master in Muay Thai, the National Sport of Thailand, and Chief Maestro in Derobio Escrima, a Filipino stick and knife fighting art.
• Grandmaster Chavez has had a positive impact in athletics in New Mexico and beyond as well as in the social and educational community for four decades. He is dedicated and hard-working, emulating a very strong work ethic. He teaches “from the heart” and has very high expectations from every student. Students learn how to work hard on the deck and in life. Students learn to value life, respect themselves and others. He expects students to “carry themselves with Manners and Respect at all times”. Students learn to do their best in everything they do and always value new knowledge.
• Grandmaster Chavez has taught thousands of children to believe in themselves by their hard work and commitment to becoming strong and exceptional athletes. For 46 years he has spent countless hours dedicated to ensuring his students not only learn martial arts as a discipline, but he has also gone beyond his work at Chavez Martial Arts Academy Inc. to make sure that they stay focused on their academic education. Grandmaster stays connected with parents, teachers, guidance counselors, the medical community and others to make sure that each student has support and guidance in all areas of their development. Grandmaster believes that all his students can and will graduate and go on to college. He is a constant advocate for their educational attainment and attends all student graduations demonstrating his enduring commitment to their success.

Community Involvement
• Volunteers and gives regular presentations such as “Stranger Safety” and “Bully Prevention” to Bernalillo County Children’s Recreation and After School Programs.
• Volunteers and gives regular presentations such as “Leadership Skills”; “Valuing Education” and “Prevention of School Failure” for Albuquerque Public Schools.
• Provides martial arts instruction to children participating in Parks and Recreation programs through the City of Albuquerque; Bernalillo County, Albuquerque Public Schools as well as several neighboring Pueblos including Isleta Pueblo, San Felipe Pueblo, and Acoma Pueblo.
• Hosts an annual Holiday Food, Toy and Clothing Drive. (For 45 years we have donated truckloads of these items to numerous neighborhood associations such as Peanut Butter and Jelly, Pajarito Mesa, All Faiths Home, Catholic Charities, Barrett House, various Churches in the city and county, and individual families in need in the community.
• Gives out School supplies to students and families.
• Organizes many fundraisers within the dojo for children and families to be able to travel and pay for tournaments throughout the United States, Canada and Mexico.
• Sits on various committees for Bernalillo County Including the Economic Development Committee.