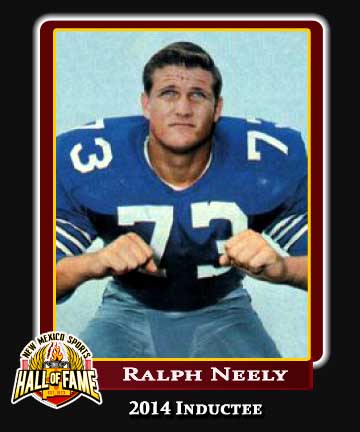 He attended Farmington High School (Class of 1961), where he was an All-State tackle for two years in football and a standout center for the basketball team.

Neely was recruited by the University of Oklahoma, where he played college football under coaches Bud Wilkinson and Gomer Jones. The 261-pound tackle played both ways, and was a dominant performer on defense and an excellent blocker on offense.

He was named the Big Eight sophomore lineman of the year and was a two-time All-American and an all-conference selection in both 1963 and ’64. He was one of three Sooners stars who missed the 1965 Gator Bowl game against Florida State University: he, fullback Jim Grisham and halfback Lance Rentzel signed with pro teams before the game and were ruled ineligible for the contest. (FSU won 36–19 behind four touchdown catches by Fred Biletnikoff.)

In 1965, Neely was drafted in the second round of the NFL Draft (Baltimore Colts) and in the AFL Draft (Houston Oilers).  On August 29, 1965, the Colts traded his rights to the Dallas Cowboys in exchange for Billy Lothridge and a fourth-round selection in 1966.

Neely accepted the Oilers’ contract offer, which also included rights to own a gas station in Houston, but requested it be kept secret to remain eligible to play in the Gator Bowl. When he learned that the Colts traded his rights to the Cowboys, he began negotiating with Dallas and returned his check to the Oilers. Litigation ensued between the Oilers and Cowboys in regards to his rights.

One of the terms of the merger agreement between the NFL and the AFL was that the Neely contract dispute be resolved. In 1966 the Cowboys finally agreed to send four draft choices in the 1967 NFL Draft) to the Oilers and to start the annual pre-season game the Governor’s Cup between the two teams.

A rookie in 1965, Neely joined the Cowboys just as they were beginning their ascent in the NFL and started right away at right offensive tackle and was named to the NFL all-rookie team.

Neely was an All-Pro four times and a two-time Pro Bowler (1967 and ’69). In 1970, Neely started the season at right guard, but soon took over for Tony Liscio at left offensive tackle, where he stayed until 1977, continuing to be one of the NFL’s premier offensive linemen. Halfway into the Cowboys’ victorious 1971 Super Bowl season, he fractured his left leg in an off-road motorcycle accident and missed the rest of the year.

In 1977, Neely retired after the Cowboys won Super Bowl XII against the Denver Broncos; he was selected to the NFL 1960s All-Decade Team.