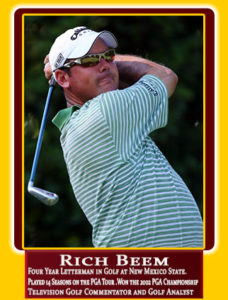 Professional
Grew up in El Paso, Texas Beem turned professional in 1994. He quit the temporarily in 1995 to work in Seattle selling car stereos and cell phones. He later regained interest after watching fellow El Paso, Texas resident, J. P. Hayes won the 1998 Buick Classic. He worked in the pro shop at the El Paso Country Club until join the PGA Tour in 1999.
• 3 PGA Tour wins (Kemper Open, The International and the PGA Championship)
• 1998 First Biggest first-place check was $5,000 he earned for winning Conrad Hilton Open in Socorro, New Mexico
• 1998 Played mini-tour events in the Sun Country PGA Section and was named Player of the Year after victories in Socorro and Truth or Consequences.
• 1998 PGA TOUR Qualifying Tournament: Earned status on TOUR for the 1999 season with a T8 finish at the PGA TOUR Qualifying Tournament in Palm Springs, Calif.
• 1999 Won the Kemper Open as a rookie.
• 2001 The book Bud, Sweat and Tees: A Walk on the Wild Side of the PGA Tour by Alan Shipnuck, which profiled Rich’s rookie year on the PGA Tour and the often-wild lifestyle of him and his caddie, Steve Duplantis.
• 2002 Career took a further leap forward with a victory at The International in Castle Rock, Colorado.
• 2002 Two weeks later, won the 2002 PGA Championship at Hazeltine National, one of golf’s four major tournaments. He shot a par 72 in the first round but followed that with a six-under 66 in the second round to pull into a five-way tie for first place. In the third round, he again shot 72 and was the second-place player, three strokes behind leader Justin Leonard. In the fourth round, Beem fended off Tiger Woods, who birdied his last four holes but finished one shot behind Beem, who shot a final round 68 to Woods’ 67. This victory helped establish Beem in the top 20 of the Official World Golf Ranking.
• 2002 Won the Hyundai Team Matches with Peter Lonard
• 2002 Had a career year on TOUR, finishing seventh on the money list with season earnings of $2,938,365.
• 2003 Finished 15th at the Masters Tournament
• 2004 Did not post a top-25 for first time in six seasons.
• 2007 Nissan Open at Riviera, Beem made a hole-in-one at the 14th hole on live television on Saturday to win a new red Altima coupe, which he immediately ascended, embraced, and sat atop of in triumph. The sequence was later made into a Nissan commercial.
• 2010 Sidelined from golf after undergoing back surgery to repair damage to his C6 and C7 vertebrae. While Beem was expected to only miss six weeks, rehabilitation issues caused the layoff to encompass the remainder of the 2010 season.
• 2010 Worked as an analyst at the PGA Championship at Whistling Straits for pga.com’s 3D and 2D broadcasts in 2010.
• 2011 Played season on a medical exemption that required him to make $658,100 in 17 events. He missed the first six cuts of the 2011 season before making the cut at the Valero Texas Open. He finished tied for 15th.
• 2012 Made just five cuts in 21 events. As a result, he lost his tour card and played the remainder of the season out of the “past champions” category in 2012. He played on the European Tour This was the last year of his ten-year exemption on that tour for winning the 2002 PGA Championship.
• 2015 Joined Sky Sports as a television commentator and golf analyst. He also planned to play at the UBS Hong Kong Open, but gave up his sponsor exemption to allow Ian Poulter to keep his European Tour card.

Honors
• Member of the US Bank Aggies Athletic Hall of Fame
Community Involvement
• Donated a 10,000 golf cart to NM State Golf in 2018.