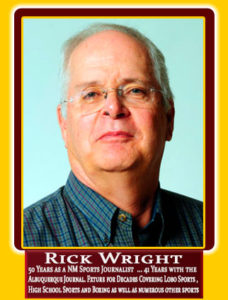 Professional: After serving three years in the U.S. Army, where he was stationed in Germany, Rick started in 1975 his sport journalist career. He has spent his entire journalistic life covering New Mexico sports. He has covered it all such UNM athletics, high school athletics, Mixed Martial Arts (MMA), Boxing Albuquerque/New Mexico Sports Hall of Fame banquets and any other major sporting event in New Mexico. He has been fortunate enough to cover eight Super Bowls (XVII-XXIV) and three Olympic Games (Los Angeles 1984, Atlanta 1996, Salt Lake City 2002. He’ll tell you the most exciting event he has covered was the fight between Freddie Roach and Albuquerque’s Tommy Cordova in July 1984 at the Showboat Hotel in Las Vegas.
During his time with the Journal, Rick’s coverage contributed significantly to New Mexico being recognized as a national and international force both in the world of boxing and the world of MMA. Rick covered New Mexico sports with integrity and fair-mindedness – characteristics recognized by his peers, his colleagues and his readership.
• 1974 Received an Albuquerque Press Club scholarship, which led to an internship at the Albuquerque Journal form May 1975 to December 1975.
• 1976 February Named Sports Editor at the Alamogordo Daily News
• 1976 October Sportswriter of the Los Alamos Monitor
• 1977 April Hired full time by the Albuquerque Journal
• 1997 Was a feature interview for HBO for the prefight for Danny Romero and Johnny Tapia boxing match.

Community Involvement
• Served one year on the UNM Athletics Hall of Honor Board
• 2007 Assisted his wife, Barbara in collecting soccer balls to be sent to youth in Iraq and Afghanistan in honor of our nephew, Nick Madaras, a soccer player and youth coach who was killed in Iraq in September 2006.