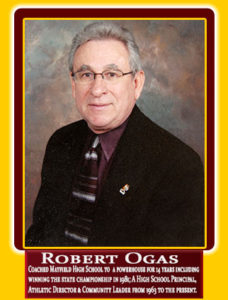 College
• Played two years of college baseball while working toward fulfilling his dream of becoming a teacher and coach.

Professional
He grew up in a home where his parents believed that participating in sports would be the key to keeping their kids out of trouble. A leader, an educator, a teacher, a coach, and a community servant who strives in his lifetime to make a difference for his students, his community, and his state. Because of Bob’s involvement and leadership in athletics, all school-related activities, and community and state programs, his success and influence can best be reflected by the passage below that summarizes Coach Ogas’ career commitment and his passionate belief that all kids will succeed if given a chance. In April 2016, former Mayfield baseball players from 1971 through 1985 held a reunion to honor Bob Ogas. Below are paraphrased excerpts from the combined testimonials that former players Ronnie Frietze, Jimmy Madrid, and Victor Armendariz delivered: Coach started our baseball program by instilling this belief: “NO GOAL IS TOO BIG TO ACCOMPLISH” In the spring of 1971 Coach Ogas started the baseball program with just about nothing. You know you can almost say this was like the movie “McFarland.” Jim White, the high school cross country coach, brought these migrant kids together, showed them how to build confidence, taught them to have goals and dreams, become leaders, and respect others. He showed them that when someone cares and is willing to give others a chance in life with life lessons…. and if YOU strive to be consistent and persistent and overcome obstacles, you will, eventually, reach your goal. This is 100% Coach Ogas! We can remember we had a dress code to abide by, haircut, shirt tucked in, clean clothes, take a little pride in yourself. These are the little things that Coach Ogas did for us to help shape us and make sure we grew up with the best chance in life.

We didn’t have much back then just an old cotton field to play on. You developed good reflexes or walked around with bruises. Practices were fun with all the wind and dust. Coach would drag the field with his Datsun PU. After that we would line up on the first base line and walk to the second base, then third base and pick up rocks till our gloves filled up. Then we started practice.

In 1973, we can remember having a sit-in/protest if you want to call it that. It was because we were having to go to State Finals in Farmington in a school bus. Coach Ogas wasn’t going to have that so he told the principal that we weren’t going unless we got a chartered bus. A few hours later guess what we see driving up to pick us up. That was a valuable lesson in our eyes. For us we respected Coach, as a Leader of our team, even more for standing up for US. Thanks, coach, for that lesson. We ended up losing the state championship game 3-0 to Carlsbad. Who would have known that a bunch of kids from a farming town like Las Cruces would have the opportunity to play in a State Championship Game. Therefore, we recall the movie “McFarland.” It took only three years to build a team of winners through preparation, planning, years of hard work, teaching, learning, dedication, team unity and friendships and most of all respect. We were representing Mayfield High School. This is what built this baseball team of winners and champions and we carry that with us today in our daily lives. Ten years later (1981) – GOAL ACCOMPLISHED! A State Baseball Championship.