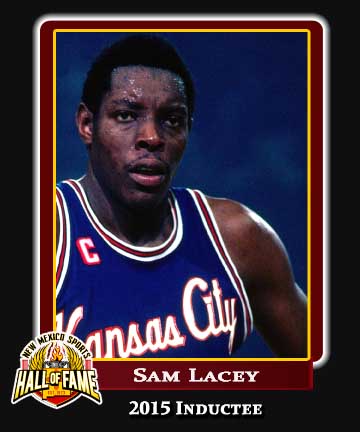 Lacey becomes the first New Mexico State University basketball player to be inducted into the New Mexico Sports Hall of Fame. A 6-10 center, Lacey played in 1,002 NBA games — more than any UNM or NMSU player who played in the NBA. Drafted in the first round (fifth overall) of the 1970 NBA Draft by the Cincinnati Royals, he played 13 seasons (1970–83) in the NBA for the Royals, Kansas City Kings, New Jersey Nets and Cleveland Cavaliers. He is one of only five NBA players (along with Hakeem Olajuwon, Julius Erving, David Robinson and Ben Wallace) to have registered 100 blocks and 100 steals in six consecutive seasons. His No. 44 jersey was retired by the Sacramento Kings. When Lacey retired in 1983, he had accumulated 9,687 rebounds and 10,303 points. At NMSU, the Aggies were 74–14 during his three seasons there. In the 1969–70 post-season, he and star guard Jimmy Collins led the Aggies to their first and only Final Four appearance. Lacey died March 14, 2014.