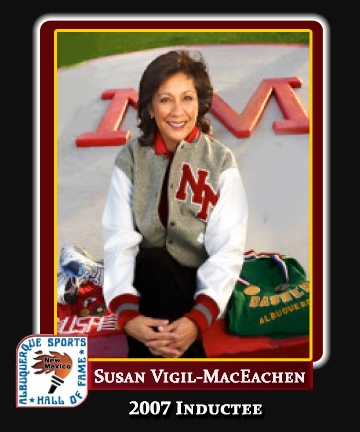 If women’s sport advocate Linda Estes opened the door for girls to compete in New Mexico, Susan Vigil MacEachen was among the first to run through.

One of the great female track athletes to compete in the state, MacEachen parlayed a love for running into an athletic caeer that remains a standard to shoot for more than three decades later.
“The opportunities that track presented, she says, “made me who I am today.”
MacEachen, then known as Susan Vigil, participated in track and field even before her hgigh school, Higland, offered the sport to girls. She was part of the Duke City Dashers program, a club that dominated the local scene and made an imprint nationally.
Litttle Susan Vigil, a Dashers stalwart from 1970-75, became one of the best-know runners in the state. She attended the University of New Mexico and dominated in cross country and track, early All-American honors give times.
“I liked track becasue I won,” she says. “But really, that just motivated me to go on and try to be more successful.”
An 800-yard and 800-meter specialist before leaving UNM in 1980 with a degree in communicative disorders, MacEachen competed in AAU national championship five times, and was a member of the U.S. Junior Olympic team. She also was a finalist in the 1976 U.S. Olympic Trials and won the 1979 AIAW national title in the 800.
MacEachen, 50, and her husband, Tim, have three children: Erin Belger, Sarah Belger, and Brandon MacEachen.
MacEachen returned to her rots at UNM, coaching women’s trach for 10 years. She now works at the university’s alumni relations office, but remains close to the sport. It’s a love, she says, tht never goes awa.
“It’s been a fun time,” she says, “to see where it had brought me.”