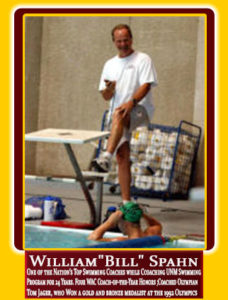 High School
• Lettered in football for 4 years for the Packers, who were the mythical state championship football team.
• Lettered in Swimming for 4 years & Team Captain for three years.
• Lettered in Track and ran on the 800-yard relay team that won the district championship
• Member of the Austin Swim Club
• Sophomore, Junior & Senior Class President
• President of Pilgrim Fellowship and state treasurer at First Congregational Church

Professional: Spahn coached for 46 years at the University of New Mexico, University of Kansas, the Wichita Swim Club and Albuquerque HYAC Swim Club. Coach Spahn distinguished himself as one of the nation’s top swimming coaches while coaching the UNM program. Spahn’s enthusiasm came in handy while surviving a near-quarter century with the mercurial swim program. Such instability within a program would drive away the most loyal of coaches, but Spahn endured.
• 1965 Coached the Albuquerque HYAC Swim Club – PE Teacher at McKinley Middle School
• The HYAC swim club were state champions for seven years
• 1972 Coached the Wichita Swim Club in Kansas. They were state champions, Region 8 champions, and five junior national champion swimmers.
• 1977 Became the Head Coach for the men’s swim team at the University of New Mexico
o Two time Big 8 Champions
• 1981 Became the Head Coach for the men’s and women’s swim teams at the UNM
• He needed only five seasons to guide the Lobos to their first-ever Western Athletic Conference men’s championship in 1986. This was one of only four sports teams in the WAC to win a championship in the previous 14 years.
• 1987-1988 UNM disbanded the women’s program, along with women’s basketball, because of budget cuts in the athletic department. Spahn still let his girls on scholarship compete that season
• 1991-1991 UNM revived the program— with women’s basketball— for the ’91-92 season.
• Coached the men’s team to runner-up WAC finishes in ’90 and ’93
• Coached and trained Tom Jager. Tom was the world champion in the 50-meter freestyle and 400 freestyle relay team. He was the American and world-record holder in the 50- meter freestyle and 50-yard freestyle, Tom won a gold and bronze medal at the 1992 Olympics.
• 1996-1997 Meanwhile, Spahn’s men’s swim team, along with wrestling and men’s gymnastics, lost all scholarships.
• 1999 Spahn kept the program alive for three more seasons, with the help of other in-state scholarship support, but it finally shut down before UNM joined the MWC
• 2005 ending a 24-year career at the school. He leaves after having guided the Lobos to a sixth-place finish at the Mountain West Conference Championships
• Under Spahn, UNM’s had 55 conference champions and 12 All-Americans during his tenure.
• 2005 Moved to Fort Collins, Colorado, where he will coach a youth FAST club program for five years. In 2010, the team was the state champions.
• 2014 – 2015 Volunteer coach of Notre Dame men’s and women’s swim team